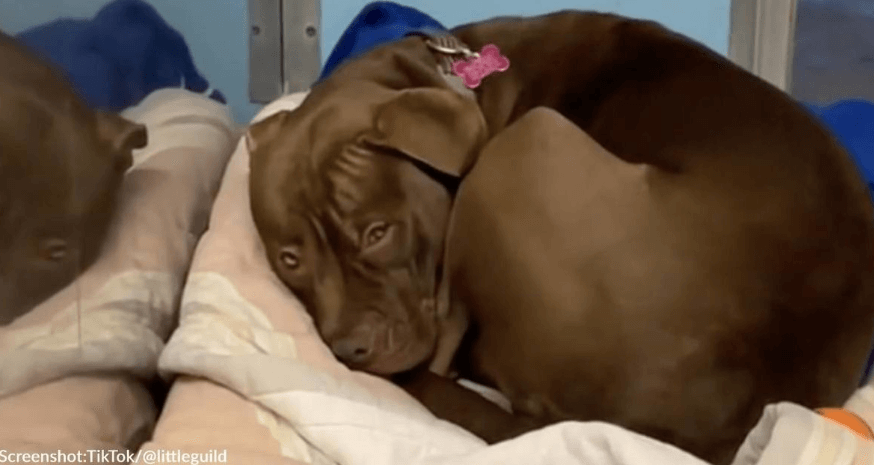 A Labrador/pit bull mix named Marry has been eagerly waiting for over a year at The Little Guild, an animal shelter in West Cornwall, Connecticut, for someone to adopt her. Each passing day and adopter are starting to take a toll on the three-year-old pup.

When she arrived at the shelter she had the biggest smile, but as her hope dwindles, she is smiling less. Marry is a smart, energetic, loyal and ready for a family of her own. She needs a home without cats, young children, and will need to meet another dog. She enjoys playing with other dogs who have the same high energy and are ok playing a little rough.

The shelter shared, “She’s got all the right stuff to be the most amazing companion!”

She has already captured the hearts of staff, volunteers, and a generous sponsor who has covered her adoption fee. Now she just needs to find her person.

Marry is clearly depressed as she spends her days curled up in a ball on her bed and barely lifts her head when someone walks by. The shelter posted a heart-wrenching video showing how Mary has lost her smile. It stated, “Mary has been at the shelter for 384 days…she is starting to lose her big smile.”

Photos of Mary grinning from ear to ear when she first arrived were featured in the short clip as well as photos of her current sad state.

The video has been viewed by millions. People from around the world commented that they hope she finds her home soon and many inquired on how to apply. The shelter is open to out-of-state adoptions as they want to find the best fit for Marry and ask people to visit their website to apply.

Marry may soon have something to smile about as the shelter shared that they received a few applications. They are still in the review process, so people are still encouraged to apply. Check out all the adoptable dogs and cats here.

Grab a tissue and then watch the video of Marry below. Adopt don’t shop!

@littleguild Marry has been waiting for over a year for someone to take her home. Marry is 3 years old, dog selective, no cats, kids 12+. For more info go to littleguild.org! #adopt #animalshelter #shelterdog ♬ Paralyzed – NF 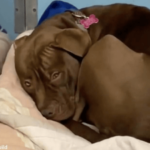