All dogs are cute, but nothing is more heartwarming than a dog that’s cute and happy. Chevy, the 9-year-old Pomeranian, fits that description perfectly. He’s a sweet little black-and-white dog who always looks like he’s smiling.

But Chevy’s smile is for more than just show. His family says he’s also one of the happiest dogs around, so his appearance is fitting. He has gained a decent Instagram following over the years, and many people check out his page just to lift their spirits. It’s hard to frown when you’re looking at a smiling pooch.

9 years ago, Tina Denlinger and her husband lost their Golden Retriever. They wanted another dog so their Corgi mix could still have a companion, and they saw that Chevy was looking for a new home. The Pomeranian puppy was living with a bunch of Dachshunds that didn’t get along with him, so the Denlingers brought him home.

The couple from Kettering, Ohio, knew their new dog was special right away. He had the sweetest expression that always looked like he was smiling, especially when he was doing something he loved. Soon, he became well-known for his precious smile.

Related Post: Woman Risks Her Own Life To Stop Two Men From Drowning A Dog

“We’ve never seen him have a bad day. It just cracks us up,” ​​Tina said. “Everything’s a celebration. If we go for a walk, he celebrates. If there’s food, he celebrates. He’s always so happy.”

Chevy especially loves spending time outside. He goes camping and hiking with the family often. He also loves riding around on his family’s golf cart, and he has tiny hats to protect him from the sun.

“He rides on the golf cart and surveys the whole area,” Tina said. “Everyone knows him …. He just gets into the cart, and he has a little harness so he doesn’t fall. And that’s his thing. It’s like he’s in a parade or something. He’s so upbeat.”

Even though Chevy has never had a sad day, there are brief moments when he stops smiling. If he’s cold or uncomfortable, his smile will turn into a little frown. But once he gets to go outside or eat a treat, his smile quickly returns.

“He does what we call ‘spin dry,’ where he spins around whenever he wants something. He goes into a complete circle.”

Chevy’s smile is infectious. Every time someone sees him walking down the street, they can’t help but smile back. So, Chevy’s humans made him an Instagram page to share his heartwarming face with the world.

If you’re ever having a bad day, look at a picture of Chevy. It’s sure to boost your mood! 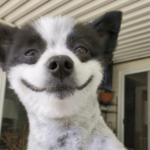