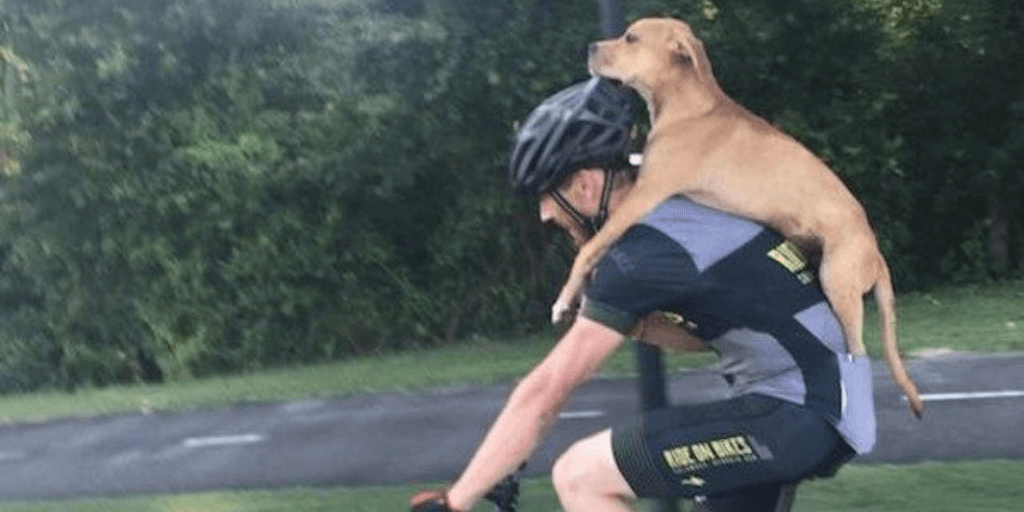 Avid mountain biker, Jarrett Little was cycling with some friends near Columbus, Georgia when they stopped near a copse of trees to rest.

Upon hearing their voices, an injured, emaciated puppy hobbled out from the woods and approached the group in search of help.

“We stopped to regroup and he came out of the woods to greet us. He was really thin, ribs showing and had a lot of road rash and a broken leg,” Little told CBS News.

Little and his fellow cyclists offered the pup some of their water and energy chews, but puzzled over how to deliver him to safety. With no car, the only way to transport him was by bike – so Little did just that!

He boosted the wounded pooch onto his shoulders piggy-back-style and peddled him all the way into town.

In a lucky twist of fate, Little met a woman named Andrea Shaw who happened to be visiting Columbus on business. The animal lover instantly fell in love with the pitiful puppy and offered to pay for his veterinary care and give him a forever home on her farm in Maine!

“Right when we returned to my local bike shop to get him some more water and food, we instantly ran into Mrs. Andrea who was in town from Maine,” Little said. “She decided to keep him and get him checked out medically.”

Shaw named her new companion Columbo – or Bo for short – after the town where he was rescued. A visit to the local veterinary clinic revealed a fractured left hind leg and a broken right front toe. Columbo underwent surgery to straighten the broken toe and stabilize the fractured hind leg with pins to help it heal properly.

Next, Shaw had to figure out a way to get the pup back home to Maine. An organization called Grateful Doggies Canine Freedom Transport Company agreed to add Columbo to one of their delivery drives up the east coast.

“Bo traveled with 25 staples in his hind leg after having four pins put in to stabilize the fractures and a full cast on a front leg to stabilize a broken toe,” Shaw wrote in a Facebook update. “They gave him all his meds and kept him comfy until he was back in my arms.”

On the evening of July 14, Bo arrived safely at Shaw’s Maine horse farm. He now has two canine brothers to play with – when he is fully healed, of course – and several strange horse creatures to investigate. His favorite is a female named Ginger!

Judging by his Facebook page, Adventures of Columbo, the once homeless and hopeless puppy now has a wonderful life of love and adventure to look forward to!

In his interview with CBS, Little marveled at the fateful events that led Columbo to his new life – from his discovery in the woods to the chance meeting with Shaw.

The heartwarming photo of Little giving Columbo a lift on his bike has gone viral, with supporters all over the world sending much-deserved love and well-wishes to the brave pup and his rescuers.