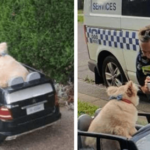 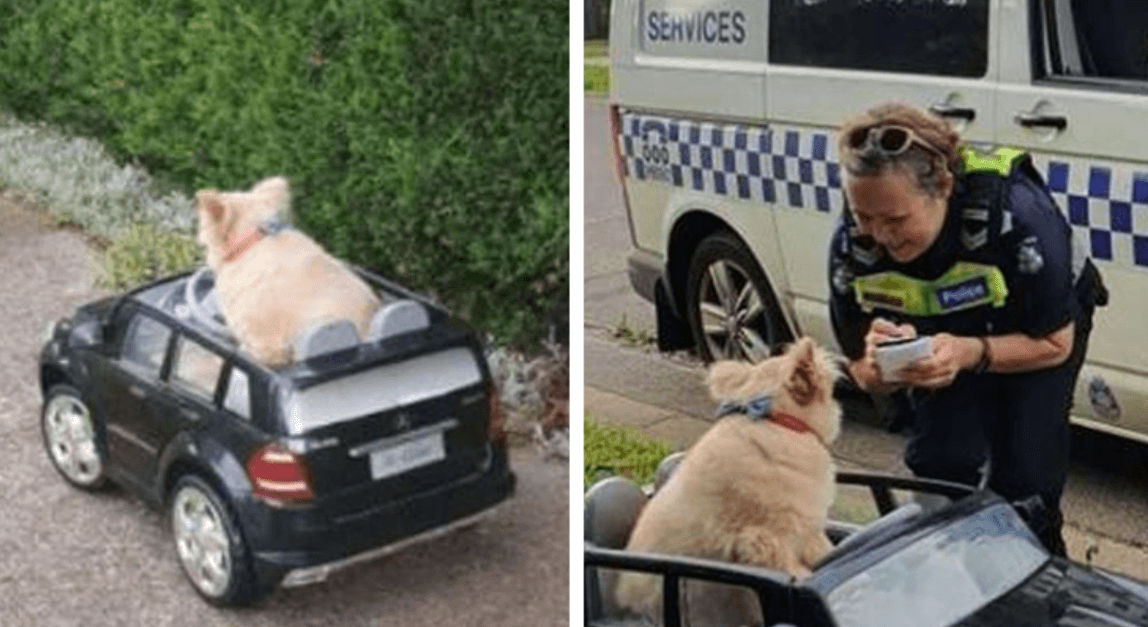 Many dogs love the thrill of going for car rides and sticking their heads out the window. However, for a little dog named Buddy, he controls his own car rides. Buddy was seen driving around on the sidewalk in a tiny black Mercedes that looks like it was made just for him. Police officers spotted this unusual sight in Heidelberg West, Australia and knew they should investigate. So, the pup had his first run-in with the police!

The Victoria Police pulled Buddy over to find out what was going on. Poor Buddy knew he was busted, but he wasn’t quite sure what the crime was. The officers informed him that he was “caught driving under the influence of cuteness”.

“We couldn’t believe our eyes. Of course we had to stop and check it out,” said Leading Senior Constable Lynda Giblett.

However, the police decided to let the pup off the hook without a ticket. Sweet little Buddy was just trying to have a fun joyride. But that’s when they realized that he wasn’t steering his car at all. The little pup didn’t even have his paws on the wheel!

The Truth About the Tiny Car

As it turns out, Buddy’s ride was a remote control car. His loving parent, Terri, was not far behind, controlling the vehicle for the pup.

The police found out that Buddy is a 15-year-old dog that is blind and deaf. As he gets older, it’s harder for him to go on long walks, but he still loves to explore the outdoors. So, Terri got him his own car so he could still enjoy the thrill of walking around the neighborhood.

Terri is also deaf, but that doesn’t get in the way of giving Buddy the life he deserves. Now, Buddy gets to go on his daily walks in style thanks to his awesome new car. The police officers were in tears after hearing this heartwarming story.

“It absolutely made our day,” Giblett said.

After the Victoria Police shared the adorable photos on their Facebook page, followers couldn’t help but fall in love with Buddy. Many commented on how happy this simple little story made them. Buddy may be old, but he still gets a chance to explore and have fun just like any other dog.

As our dogs age, it might be harder for them to do everyday things, but our love for them will never fade. Terri has clearly taken great care of Buddy, and their bond is an inspiration to all dog parents. All dogs deserve to drive in style as Buddy does. Hopefully, he continues to drive safely to avoid getting pulled over again. After all, he doesn’t even have a license!