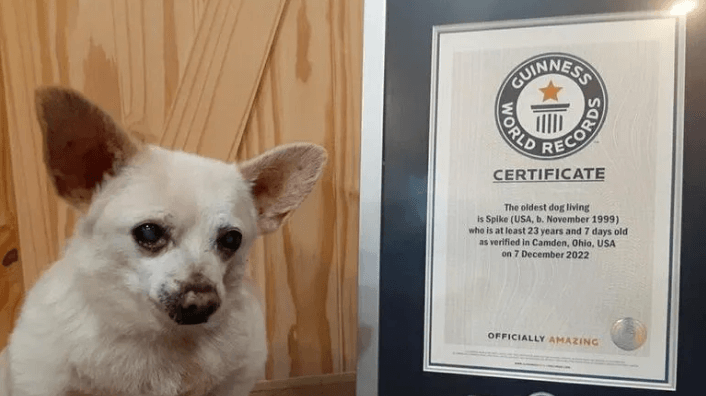 It’s true that dogs don’t live as long as humans, but some are blessed with good long lives, inspiring us all with their health and longevity. And a select few even get to claim the title as the oldest dog in the world.

Now, a new dog has claimed the title: Spike, a 23-year-old Chihuahua, has been officially named by Guinness World Records as the oldest dog in the world.

According to Guinness, Spike was 23 years and 43 days old as of December 7, 2022, making him verifiably older than the previous title holder, Gino, who was named the oldest in November.

Say hello to the new oldest dog in the world! 🥰️

Spike, who lives with human Rita Kimball in Ohio, is 23 years and 7 days old. pic.twitter.com/iTGKegBBN9

Super-senior Spike lives with his owner Rita Kimball in Camden, Ohio. The future record-holder got off to an inauspicious start in life: Rita found him in a grocery store parking lot, apparently mistreated by his previous owner.

“He had been shaved up his back, had blood stains around his neck from a chain or rope, and looked pretty rough,” Rita told Guinness World Records. “The clerk in the grocery told us he had been there for three days, and they were feeding him scraps.”

When Spike followed her out of the store parking lot, she knew it was the beginning of a beautiful friendship and decided to take him home.

She named him Spike, an ironic name for her “small and friendly” dog: “Spike was a name for a large dog. My guy was small, but he had the attitude of a big dog.”

Spike was already 10 years old at the time, hardly a pup, so Rita surely couldn’t have imagined he’d be around for another 13 years.

Over the years, Spike has enjoyed a nice routine living on the farm. He wakes up early, visits the barn animals and accompanies his owner through her daily chores.

“There’s always something to do on a farm; we cut wood, clean out fence rows, bale hay and harvest crops,” Rita explained. “Spike has ridden on tractors, been a passenger inside the combine, and tags along when we cut wood.”

But Rita didn’t realize her sweet little dog could actually be a world record holder until she was watching Jimmy Fallon and realized that Spike was older than then-oldest dog Pebbles.

“Most of our family knew that Spike was old but didn’t know he had a shot at being the oldest in the world,” Rita told Guinness. “Now that he is a record holder, they see him as a celebrity.”

Spike is showing his age a bit: he’s almost blind and hard of hearing, and can get “testy at times,” but deep down he’s still the same sweet dog: “His little tail still wags when people talk to him.”

The title of world’s oldest dog has changed hands quite a bit over the past year. Last April, a 21-year-old Chihuahua named TobyKeith claimed the title, only to be unseated weeks later by 22-year-old Pebbles.

But in October, Pebbles passed away, allowing TobyKeith to reclaim the crown — until Gino was found to be even older.

Now, the record has changed paws once again. But no matter who has the official title, all of these dogs are amazing, and a testament to how love and good care can make some dogs live well past their life expectancy.

Congratulations to Spike on becoming the new world’s oldest dog! What an incredible achievement! 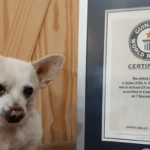