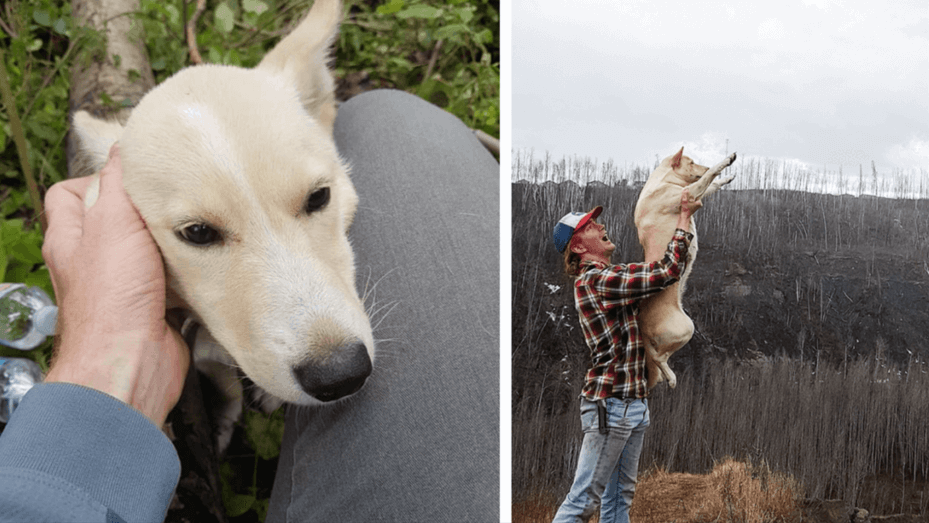 With over a million subreddits for all sorts of specific communities, Reddit has a lot to offer. Particularly for us dog lovers, a subreddit called “BeforeNAfterAdoption” lets rescuers and dog parents share the stories behind their adoptions. Naturally, all these photos and videos are touching, a nice reminder of why we love to save animals.

Graham Whatmough, or as he’s known on Reddit “u/WhereTheHighwayEnds” shared a beautiful video of his dog Willow happily enjoying the outdoors to the page. You’d never be able to tell she had such a rough past before they met. This happy, outdoorsy pup was once found starving and immobile in the woods. The meeting between her and her rescuer just had to be fate.

An Unusual Discovery In The Woods

Four years ago, Whatmough quit his job in the oilfield to pursue his passion of being a freelance photographer and videographer. He spends much of his time outdoors exploring beautiful places. One day, he discovered something a little different on a hike through the woods.

Whatmough usually took the same path through these woods, but today he decided to take a different trail. As he stopped to take a photo of some berries he found, he noticed something else.

“I took just a few steps more and I saw a fallen tree and an off-white animal laying behind it. I thought it must be a small deer or a coyote hiding because it wasn’t moving or making any sounds. Then I saw a pink collar and realized it was a dog.”

At first, the dog showed signs of fear aggression, baring her teeth and growling. Whatmough didn’t get any closer than 15 feet from her, afraid she would run off. He tossed her some of the berries he had picked, the only food he had to offer. To his pleasant surprise, she ate the berries and even wagged her tail a little bit. He also offered her some water from his bottle, which she drank quickly, so he returned with more water from his truck.

Considering her willingness to trust, Whatmough figured she was a runaway or lost dog. She looked only a few months old.

“I still thought she was just a runaway and was maybe dehydrated and a little starved. The berries and water had allowed me to get close enough to her to start scratching her snout and she really liked it.”

Even though she seemed a little friendlier, Whatmough noticed the dog didn’t seem to want to move much. Something definitely seemed wrong with her hind legs.

“Now that she warmed up I coaxed her to get up and walk I saw she was almost walking entirely on her front legs at some points both her back legs seemed to come right off the ground. I still thought that she was maybe just needing food and exercise after being stuck in the forest for a while.”

Soon, Whatmough would learn that both of the dog’s back legs were broken, and as a result, had started to heal improperly. Her condition didn’t look too good.

The Road To Recovery

Whatmough brought the dog to the veterinarian for treatment and x-rays. They determined that she would need to have her legs amputated or she would require expensive, risky surgery. In the meantime, no one came to claim the poor girl.

Whatmough wasn’t sure what to do at first. He wanted a dog, but was he ready to care for one with many physical challenges ahead of her? Could he even afford that type of care?

“When the vet started listed my options as amputation, a very expensive surgery or surrendering her to bylaw where she would most likely be euthanized I decided to take care of her at least until I could find someone that was able to adopt her.

As he’d been sharing updates about the dog he found in the woods, people became invested. Whatmough explained that his community pitched in donations to help pay for surgery. They were able to come up with $4000 in a single day!

That’s how he knew, there was no way he could give this dog up.

“After seeing how my community rallied around her with the donations and having her for a few days I knew I wouldn’t be able to give her up.”

He named the forest dog Willow, fittingly. Every day, Whatmough stretched Willow’s legs and walked her. At times when she seemed to struggle, he regretted not getting her surgery. But brave Willow pulled through her tough recovery.

“She also would show some signs of discomfort when I would stretch and pull her back legs but I would always stop and then she would let me stretch her some more. She progressively resisted less and less and now she doesn’t seem to mind at all when I really pull hard and work to stretch her.”

A Family That Does Outdoors Together

Willow didn’t let her past experiences turn her off to romping through the woods. She and Whatmough spend all their time together, especially now that he works at home.

“I am outside hiking 2-6 hours everyday summer and winter and she loves it all. She really loves the snow but after about 4hrs in -30C she starts to try and get her paws off the snow and looks for shelter and I know it’s time to go back home.”

For a dog with formerly broken and malformed back legs, Willow runs like an absolute champ now!

Willow and Graham’s story reminds us that every dog is worth it, and sometimes fate pushes us into the right dog’s path. Here’s wishing them a lifetime of happiness together! 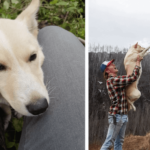