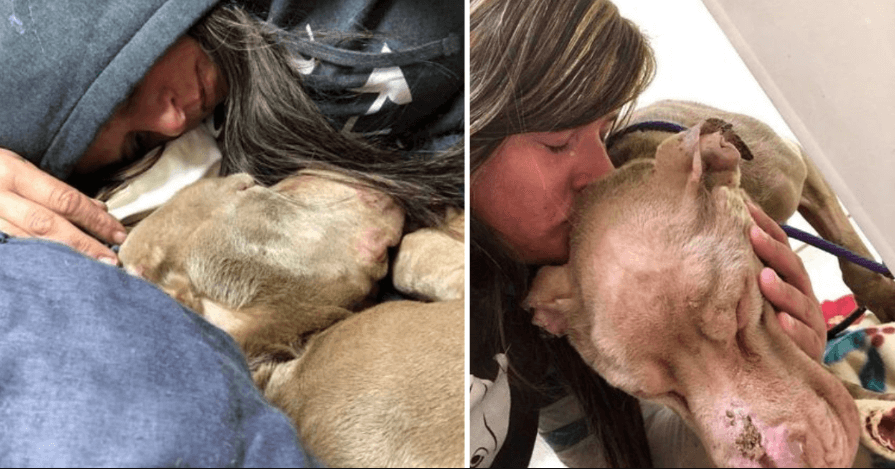 It’s a sad truth that dogs don’t live as long as people, but the best we can do is make their lives as great as possible and make them feel loved right until the end.

No dog should have to die alone, and it’s important that they feel comfortable and safe in their final moments.

In one bittersweet and beautiful story, one woman went above-and-beyond to make sure a dying shelter dog had a friend in his final hours.

A dog named Watson arrived at Speranza Animal Rescue in 2018 after a college kid found him alone in the park.

The shelter took the dog in — but it was clear he didn’t have long to live. The stray was emaciated and covered in sores, and had a cancerous tumor in his hind leg. He was taken to the ER, treated with IV antibiotics and received tests.

But shelter founder Janine Guido sensed that the dog might not have long to live, and the only thing to do was make him feel comfortable. “I had a gut feeling that things weren’t going to be good the next day,” she told The Dodo.

RELATED POST : Man Spends Entire Day In The Blizzard Trying To Save Dying Puppies From A Pipe

So, Janine put some blankets and dog beds on the floor so Watson would have a cozy place to curl up and sleep — but then, she did something extraordinary.

Sensing that the dog was in his final hours and could use some company, she decided to spend the night with him. She wrote on Facebook that she “could not bring [herself] to leave sweet Watson.”

Janine and Watson cuddled, and Janine spoke to him as they fell asleep. Not much is known about Watson’s past, but given his condition it seems he had lived a life full of neglect and loneliness. Janine showed him the love he had gone so long without.

“I didn’t want to leave him alone. Not when he needed me the most,” she told The Dodo. “He slept like a rock all night, cuddled up to me so tight. I cried myself to sleep, and woke up in tears as well.”

When Watson woke up the next morning, he was in bad shape. The shelter wrote on Facebook that he was “turning cold, spinning in circles, and falling over,” and that he was “suffering.”

Watson passed away that morning — and Janine was with him until the end. “I held you as you took your last breath. You went so peacefully. I know it was your time,” Janine wrote.

“I sat with him til the end. I spoke through my tears. I told him how much he was loved.”

While she was heartbroken the dog passed away, she knew that in their few hours together, she made him feel loved for the first and final time.

“I’m so glad I got to cuddle you and hold you tight last evening. I hope you could feel how much I loved you,” she wrote. “Even though I only knew you a short while.”

“I’m just so thankful I was able to hold him tight for his last night,” Janine told The Dodo. “I was telling him how much he was loved — and that his life mattered. My heart is breaking, but I would not change a thing.”

It’s a sad story, but it goes to show the impact a little love can have in a dog’s life ❤️💔 Thank you to Janine for showing Watson the love he had so long been denied, right when he needed it the most. 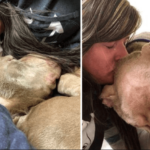