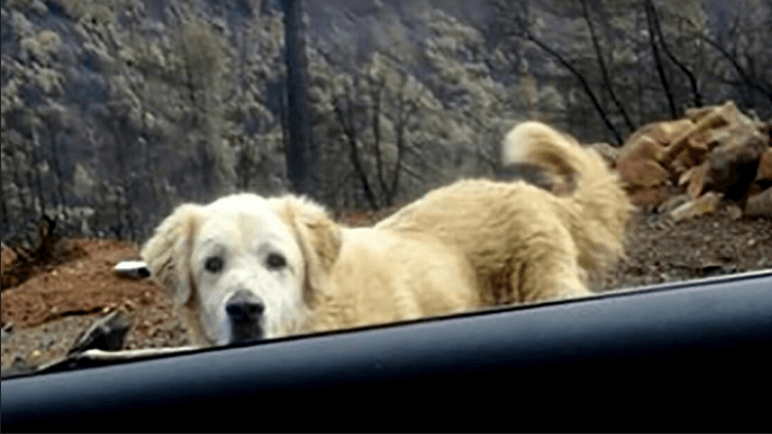 When a family were unable to return to their home due to the recent devastating California Camp Fire, all they could think about was their beloved dog Madison.

They hoped and prayed that he would be okay but were of course so worried for his safety. But, little did they know the loyalty and strength of their family pet and the guardian angel keeping him fed and watered until he could be reunited again.

Four weeks after the family were stopped from returning to their house because it was too dangerous, they were able to return but couldn’t believe who was there waiting for them.

“I’m so HAPPY to report that Andrea was allowed to return to her property today and THERE MADISON WAS!!!! He had stayed to protect what was left of his home, and NEVER gave up on his people!” K9 Paw Print Rescue shared in a Facebook post.

“Madison’s parents were unable to get home to him when the Camp Fire spread. They hoped and prayed he would be OK. When they finally got clearance to go back to the lot where their house once stood….Madison was waiting there for them as if he were protecting his former home. Never give up!!” the group wrote.

Rescue worker Shayla Sullivan who helped look after pets, including Madison, following the devastating fires, wrote: “I’m so happy I’m crying as I write this! He didn’t give up through the storms or the fire! A LOOOOONG month it must have been for him!”

Andrea Gaylord, the dog’s owner, said that the reunion was emotional. “Imagine the loyalty of hanging in in the worst of circumstances and being here waiting,” she told ABC 10. “It was so emotional.”

‘Seeing him was surreal’

Animal hero Shayla said on her Facebook page that had been looking for Madison after his owner reported him missing and made sure there was fresh food and water in the area until his owners could return, but never actually spotted the sweet hound.

“It was the BEST feeling having Madison meet our truck. After feeding him for almost a month, but NOT knowing he was for sure still there, seeing him was surreal,” she wrote.

Shayla said the owners plan on building a new house for Madison to watch over.

I’m so glad Madison didn’t give up, his actions are a testament to how loyal dogs are. And thank goodness for these animal heroes who are doing all they can to keep people’s pets alive until families can return to their land.Please share with your friends and family so more people know about this amazing animal!

Please share with your friends and family so more people know about this amazing animal! 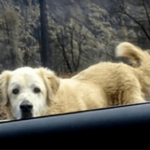