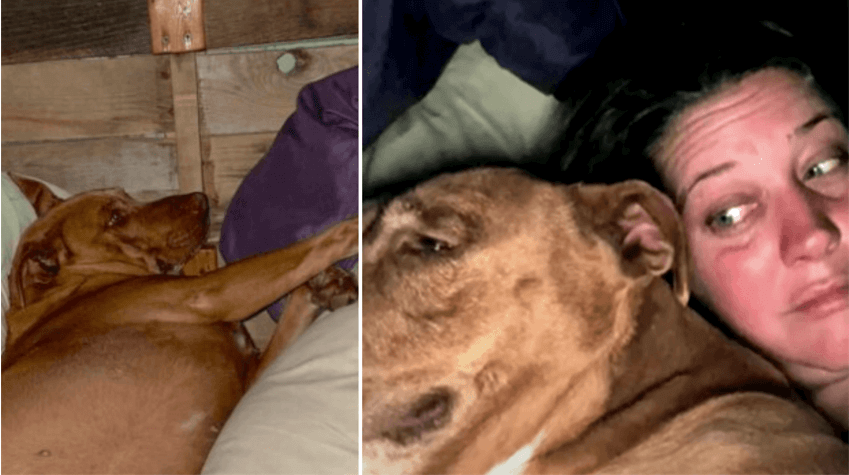 It’s normal for Julie Thornton Johnson and her husband Jimmy to have several dogs in their bed. They have three furry friends who love getting extra cuddles at night. So, when they saw a dog right beside them on a pillow, the couple didn’t think anything of it.

But when they woke up in the morning, they didn’t recognize the dog snuggled up beside them. However, the worry was the furthest thing from their minds at that moment. Instead, all they could do was laugh and wonder how the dog snuck inside without alarming the other pups.

When Jimmy woke up, he asked Julie who the dog in the bed was. Julie realized that they’d never seen the dog before, but the pup had made herself at home. She seemed friendly, so the couple didn’t bother moving her.

Julie took some photos of the comfortable dog and posted them online. While she waited for a response, she had a lot of questions.

“One, how did the dog get in my house? And two, we have three dogs, and they bark at anything. A squirrel in the yard, a rabbit, a bird, they bark. And there was no noise,” said Julie.

The couple later realized that the back door must have been left open by accident. However, it’s still a mystery how the dog wandered into their home and hopped in their bed without causing a commotion.

Soon, Julie’s humorous post about the strange dog went viral. Cris Hawkins spotted the post and messaged Julie, saying that the dog was hers and named Nala. Hawkins lives a few houses down, and she believes Nala must’ve slid out of her collar at night and ran down the street. When the pup craved attention, she found her way into Julie’s home.

Julie asked Hawkins for proof of ownership before giving up Nala. Hawkins sent her plenty of pictures, including some Christmas photos. Jimmy was still cuddling with Nala when her family arrived to pick her up. Nala wasn’t eager to get out of her comfortable spot, but she was happy to see her humans. Julie and Jimmy joked that they would’ve had another dog if no one had claimed her.

Julie and Jimmy have since befriended the women who own Nala, and the silly story has gone viral. Everyone involved found the situation hilarious, and it’s a day that none of them will ever forget. 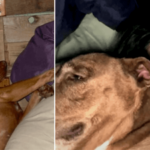