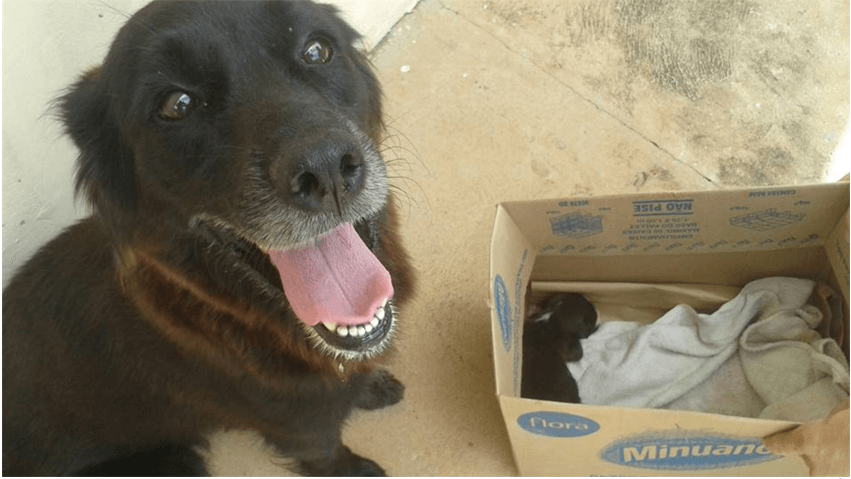 The morning of Tuesday January 31 began just like any other for a police officer in Novo Horizonte, Brazil. He was leaving to drive his daughter to school when he noticed a neighborhood dog rummaging through the trash.

At first it appeared that the dog had found a dead kitten, but on closer inspection the officer saw that it was a tiny newborn puppy – and that it was still alive.

He tried taking the puppy from the dog, but she whined frantically, so the officer allowed her to watch over it while he phoned for help. He contacted Marco Antonio Rodrigues, a local pet sitter and animal rescuer, who happily took the pup in – naming it Charlie Chaplin for its little black mustache.

Rodrigues immediately began a Facebook campaign to try to locate a nursing mama dog to adopt the abandoned pup as her own. Lupi, a Chihuahua mix living across town, had given birth just a few days before little Charlie was found. Her owners volunteered to help if Lupi was willing to accept the puppy.

Luckily Lupi immediately took to the poor little orphan. With a mix of fresh milk and antibiotics, Charlie has begun to regain his strength and thrive as an adopted member of Lupi’s litter!

The person responsible for disposing of the helpless pup like garbage has not been caught, but his or her cruel indifference is far outweighed by the incredible compassion shown by the 2 dogs who rescued little Charlie.

If it were not for one dog locating him and the other adopting him as her own, he would never have had a chance. Just another example of dogs’ immense capacity for compassion!

*NOTE: Although we do not know the dog who found Charlie’s name, she is owned and has been hailed as a hero by her family and her community – just like Lupi! 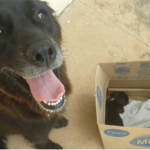