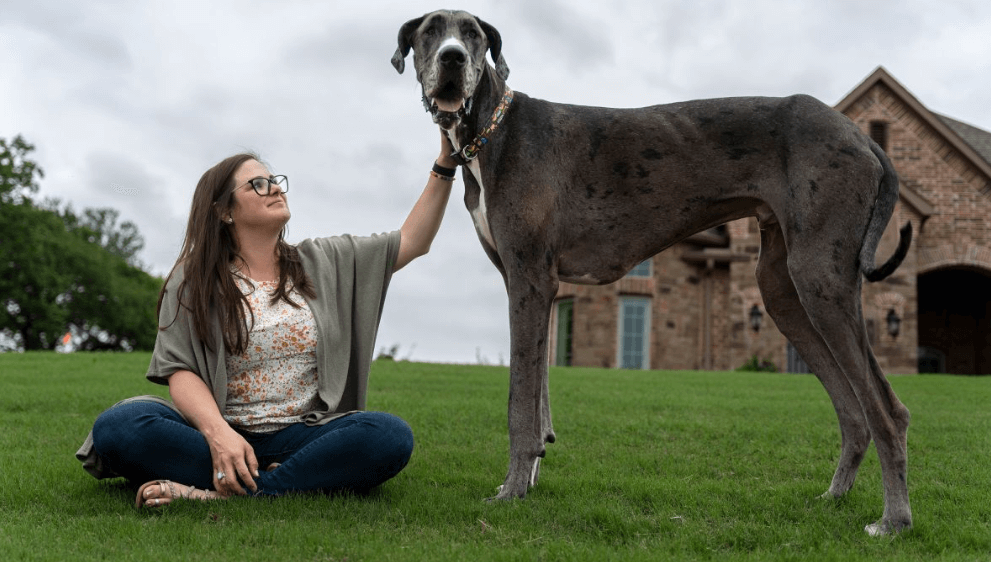 Zeus, an American Great Dane from Texas, has been confirmed by The Guinness World Record as the world’s tallest living dog.

“He’s been a big dog since we got him, even for a puppy,” Zeus’ owner Brittany Davis told Guinness World Records. The two-year-old pup stands at 3 ft. 5.18 inches. “He had huge paws,”; she added. Zeus, who is gray and brown, was the largest puppy in a litter of five born to a Merle Sire and Brindle Dam.

Davis says a typical day for Zeus is going on walks around the neighborhood, wandering around local farmer’s markets, and sleeping by his window. Her dog is scared of rain, enjoys stealing her baby’s pacifier and eating food left on the counter, but is generally well-behaved. Zeus lives at home with three miniature Australian Shepherds and a cat.

According to Guinness World Records, Zeus’ diet includes twelve cups of “Gentle Giants” large breed dog food every day. He occasionally enjoys fried eggs, bully sticks, or ice cubes, which are one of his favorite treats. Davis says his water bowl is a sink.

According to the Guinness World Records, the world’s tallest dog ever was also named Zeus and is a Great Dane from Otsego, Michigan. He was measured 44 inches but could reach heights of seven feet and four inches when standing on his hind legs. He passed away at the age of five in 2014. 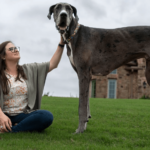