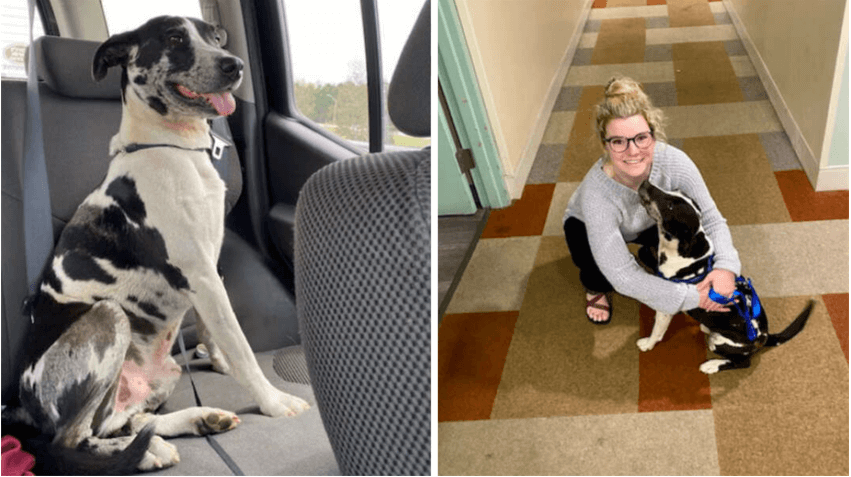 Brianna Hagood’s husband, Tyler, plans a surprise weekend getaway for her birthday. The thought of having to relax excites both of them. They stopped at a fast-food drive-thru to grab some food and noticed a dog, without a collar, wandering in the parking lot.

“I looked at Tyler and said, ‘BABE!’” says Brianna. “He looked and me and said, ‘No, honey, let’s just go to the beach.’ As he continued to the window, I slightly raised my voice in excitement, remembering, ‘I can save that dog if I want to because it’s my birthday!”

“The cashier opening the window looked shocked at first, then looked at Tyler and said, ‘She should save that dog. It’s her birthday and it’s been here all morning!’ That was all the encouragement I needed.” she continued.

“Tyler got our food and pulled out of the drive-through and parked the car next to where I was sitting with the goodest boy,” she said.

“I opened the car door and asked if he wanted to come in and before I finished asking, he had jumped in my car and was sitting down … There was never a decision for me. When I got out of my car, I knew I was not leaving this pup on the side of the road.”

The couple asked around businesses in the area, and everyone said the same thing. The dog had wandered up that morning and no one seemed to know where he came from or who he belonged to.

The couple stopped at a vet clinic to see if the dog was microchipped. He wasn’t, so they get him all of the supplies he’d need to join them on their beach weekend.

They’d originally been planning on bringing their new puppy with them, so they’d already booked a dog-friendly room at the hotel, which made Brianna feel like it was meant to be.

The couple spend the night snuggling with the dog, and the next day he joined them for the birthday celebration. He enjoyed the boat ride and the entire day, he acted as if he’d known the couple his whole life.

The dog’s family commented on Brianna’s post, so the couple drove to their house and drop the dog off. They found out his name was Blu, and he’d escaped his family’s yard while they were at work.

Brianna was heartbroken saying goodbye to her new furry best friend, but she was happy she’d been able to reunite him with his family. They headed home after an eventful weekend — but the story wasn’t over yet.

That week, Blu’s family got in touch again. They realized things weren’t working for him, and as hard as it was, they asked if the couple would be willing to adopt him.

“Blu came to our home on Thursday, and he fits right in,” Brianna said. “He stays right by my hip at all times … He is the best boy, and we love him.”

The entire weekend, Brianna kept having this feeling that she was meant to find Blu, and it turns out she was right.

Related Post: Woman Thinks Her Dog Caught Baby Birds, Then She Looks Between The Dog’s Paws And Sees This 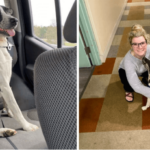