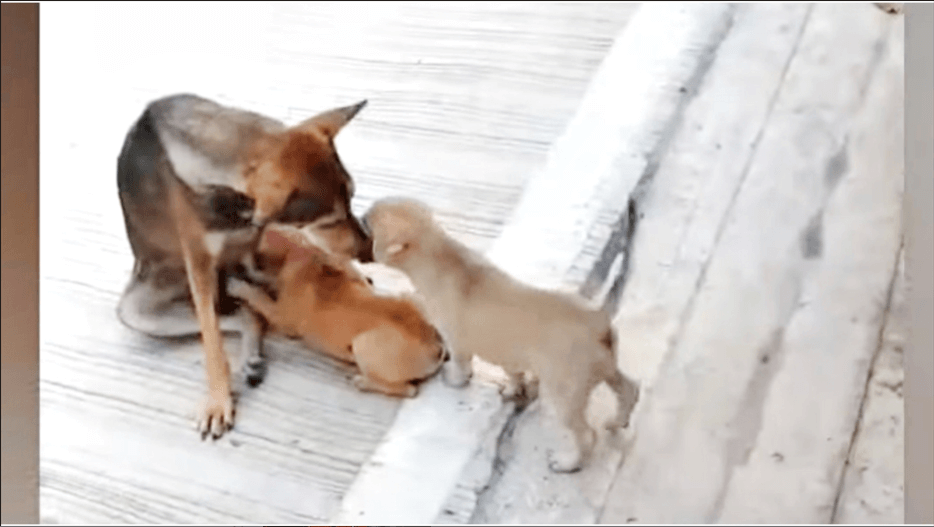 A mother’s love knows no bounds. This story is a perfect example of that unrelenting quality. When a momma dog was hit by a car and suffered severe injuries, she still managed to take care of her puppies. Even though it was difficult for her to walk, let alone stand on three legs, she followed them around and made sure they were always fed and taken care of.

The streets are a dangerous place for dogs, especially when there is heavy traffic. They often have to cross busy roads to find food, water, and shelter, and many are hit by cars and left with injuries. In poorer areas, strays are common – and many of them have to fend for themselves even if they are wounded.

When this mama dog was spotted by a rescue group, she still nursed her pups even though sitting down was painful. She never pushed them away, which was quite amazing considering that puppies are rejected all the time.

Despite her leg being fractured in numerous places, Mama still kept her two pups clean with her kisses and tracked them as they scampered about.

The family was rescued and taken to the clinic by a group of heroes. Mama required surgery, according to x-rays. This was a costly procedure that required the entire rescue team’s resources to pay for it. Mama had her operation the next day after receiving donations. The pups were looked after by volunteers and were very well-behaved.

The surgery was successful and Mama never complained. Even when she was groggy and in pain, despite being on pain medication, she was a total trooper.

It amazed her new human friends that she was so warm and friendly even though she had spent her entire life on the street being passed by and ignored.

Once Mama was in recovery, and her leg was in a cast, her puppies were brought over to her. They were so happy to see that their mom was safe.

She gave them kisses and they curled up against her body. The little family slept while volunteers stayed the night.

To see their full story, check it out in the video below. Thank you to all those who saved this precious family. 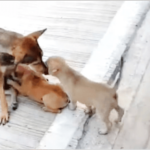