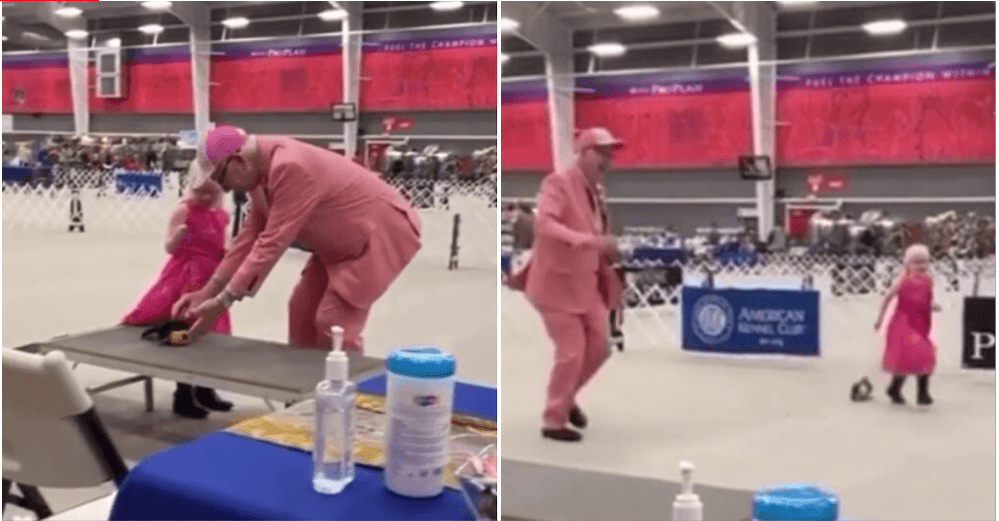 We all think of dog shows as quite formal environments with the dog show judges being very serious people with a strong side-eye game. But one post from Reddit dispels that myth by showing that the judges are ordinary, kind-hearted people.

Redditor hiimcoleman shared a video of a dog show judge who went out of his way to make a little girl with autism feel included. The little girl was sitting on the sidelines holding a stuffed toy dog which she’d decked out for the occasion with a leash. Taking note, the judge approached her.

This beautiful little girl has autism. She brought her stuffed-puppy to the dog show.

One of the judges stopped, walked over to her, and asked if she wanted to show her dog as well.

This is what happened.

Goodable shared a tweet that read, “A judge at a dog show saw a young girl watching from the sidelines. The girl had autism, and she’d brought her stuffed animal. So the judge stopped, walked over to her, and asked if she wanted to show her dog, just like the others.”

It is quite heartwarming to watch the way the judge goes out of his way to include the girl by inspecting her toy dog before letting the little girl show off her dog’s “skills.” The crowd reacts with a unanimous “aww” after the little girl returns from her lap and the judge gives her a hug.

Former NBA player Rex Chapman saw the video and shared it with his 528,000+ followers, writing, “This beautiful little girl has autism. She brought her stuffed-puppy to the dog show. One of the judges stopped, walked over to her, and asked if she wanted to show her dog as well. This is what happened. Humanity.”

A different Reddit user under the name pokechuno, revealed the judge’s identity, writing, “This is Johnny Shoemaker at the Poodle Club of America show last year. Super nice guy, he was the judge for a Poodle themed hat contest and even though I was disqualified for having a hat with Balloons he still gave me an honorable mention before announcing the winner.”

Info Dog Mobile has a short Johnny Shoemaker bio which reads, “I also was in management with Smith Barney for 28 years and retired in 2008….and love retirement as it gives me more time to learn new breeds and judge. I have been honored to judge at many great dog shows in the USA plus dog shows in China, New Zealand, Australia, Canada, Mexico, and South Korea and soon Argentina. I have judged Best Of Breed at the Poodle Club of America twice and Miniature Poodles in 2019. I have judged the AKC-Eukanuba (now Royal Canin), Dog Show, in 2009 and 2010 and 2015. I also judged the Non-Sporting Group at Morris & Essex in 2015.”

Needless to say, there have been plenty of reactions from people across social media:

User surloc_dalnor said, “I love how at the end he offers a hug but stays where he is. He lets her approach him rather than just hugging her.”

Another user, gaveedraseven, commented, “He was great the whole time! I saw at one point he went in like he was going to touch her shoulder but stopped short. Then he opened his arms at the end and looked over to what I’m guessing was a parent or guardian as if to ask is this ok. I just got the feeling that this was a guy used to physical contact who was consciously reigning himself in out of respect and understanding. Definitely a good guy.”

It is always nice to see people being kind to one another. It definitely gives me hope for humanity. 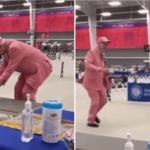