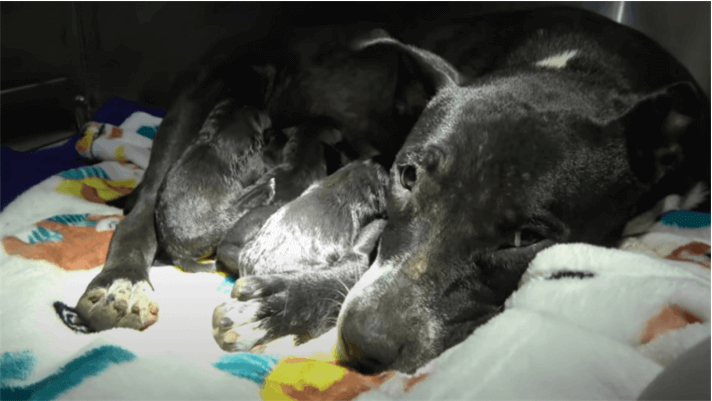 The life of a homeless dog might be just as hard as that of homeless people, especially new mother dogs with puppies in the picture. Not only do they have to worry about where to stay, but also they’re often treated badly and are not shown much mercy, sometimes even considered a nuisance.

Dogs don’t have the same capability to let people know what they’re struggling with or what happened to them and it becomes more difficult when the rescuers can’t figure out how they can exactly help.

Take this story of this young mother dog that was discovered when people saw her carrying her baby that passed away and how that led to someone seeing the rest of her newborn pups that needed care and attention.

It started when the rescuers received an urgent text and a video of the mother dog carrying her pup looking for help. It was said that she had given birth on the streets. Immediately, they went to the house of the one that contacted them and they arrived at the sight of a small area of the house that was gated to keep the mother dog in along with her pups.

She was inside what looked to be a small land cave surrounded by plants. With her back facing the entryway protecting her babies with her body, they figured that she was scared and it would be kind of a struggle to get out of there.

The rescuers gently tried to befriend her and call her to come near them, but this wasn’t working. She was too scared and just growled at them. But despite this, it showed that she wanted the help, it’s just that she was scared to trust them just yet.

With a gentle snare, they planned on pulling her out. Which surprisingly worked for them ‘cause she cooperated and put her head in it. It was still a struggle to get her to stand up and come to them, but after several tries, while talking to her, she went out of the hole without her stepping on the pups.

The way the mother dog approached them made it clear to the rescuers that she was a sweet dog that meant no harm. Both rescuers tried to reassure her that they, too, meant no harm towards her and the babies. Jade, the name they decided to give her, allowed the rescuers to go near her babies and let them handle all seven (7) of them, one of which sadly passed away.

As they picked the puppies up for the transfer, Jade started to show that she was anxious about it, so one of the rescuers said that it would be best to show her the pups were in good hands to calm her down. Using one of her pups, they led her into her crate. Not wanting to risk the babies being stepped on, they decided it would be best to use a different crate for them but still keeping it within the mother dog’s sight.

As they were leaving, the rescuers promised the people that contacted them that they’ll be sure to update everyone with the family’s status.

The rescue is far from over, this was just the start of it.

They headed towards the hospital to make sure that the mother dog and her babies got the medical attention that they needed. There they found out that she was a young mother dog, which explains why she’s a bit more anxious with people handling her babies.

Thankfully, they were all healthy and did not need any serious medical help. But despite being perfectly okay and rescued, Jade still looked like she wasn’t at peace with something. Perhaps, she was just adjusting? At least that’s what the rescuers thought.

The following day an unexpected message explained why Jade was still worried. Stephanie, the person who called about the dog, told them that apparently a neighbor took one of the babies thinking she could take care of it on her own. After a long night of discomfort and crying, the neighbor realized that it was wrong for her to separate the one-day-old baby from her mother. This brings us to the rescuers finally reuniting the stolen baby with her momma!

Jade was so happy to be reunited with her baby, she no longer looked anxious. They thought it fitting to name the babies inspired by gems because they were so precious.

The family immediately got a group to foster them until they could find their forever home.

Fast forward to eight weeks later, they’re infinitely happier and are all ready to be adopted.

Rescues such as this won’t be possible without the help and support of a community dedicated to giving dogs a better life.

If you want to keep updated on this mother dog’s journey, the video is below for you to enjoy! 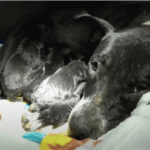