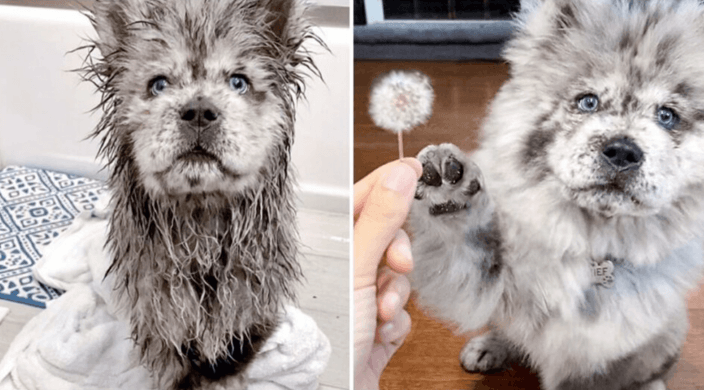 We can bet that you’ve never seen a Chow-Chow like Chief before!

Four-month-old Chief, who also goes by “Oreo Cloud,” was given that nickname by his human, Sara Hamilton, because he looks like an Oreo McFlurry dessert.

He is basically a walking bowl of cookies and cream ice cream!

Chief got these colors because he is a “merle” Chow.

He comes from several generations of pure Chows, but it’s possible that somewhere down the line there may have been a genetic defect or a mixed breed, but it must’ve been a long time ago.

He may be small now, but he will grow to be around 85 pounds.

He has a very sweet and friendly demeanor, and his humans plan on having him certified as a therapy dog for sick children when he’s older.

Chief is extremely fluffy and surprisingly loves bath. In general, Chows will shed twice a year, but his humans brush him every day to avoid matting.

Aside from baths and being Internet famous, Chief also loves belly rubs and taking naps with his humans, where they reside in California.

Young Boy Crawls Deep Into Storm Drain Trying To Help A Trapped Senior Dog
Abandoned Dog Waited In The Pouring Rain For Her Family To Come Back For Her
mohammedltc
Related Posts
0 0 0
May 19, 2022
0 3 0
May 18, 2022 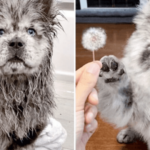