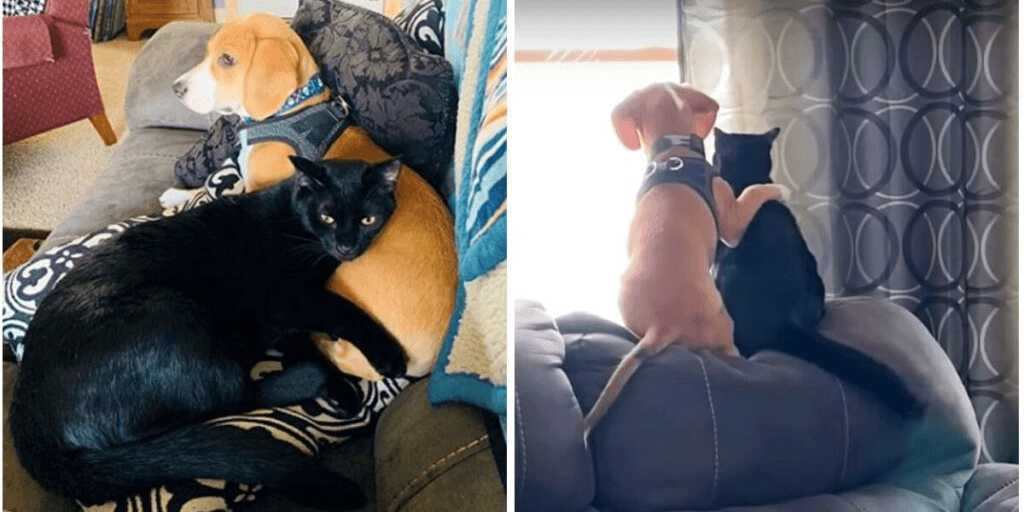 When Bo, a five-month-old Beagle, was first introduced to his cat sibling, Jasper, he didn’t know how to act. And of course Jasper was unsure if he could trust his new pup brother.

Their owner, Lisa Olsen-Plummer had a feeling that the two of them would at least tolerate each other eventually, but she had no idea how close they would become.

Bo and Jasper warmed up to each other, and not only did they learn to live with each other, but they can’t live without each other! They are the best of friends and completely inseparable.

If their snuggles and playtime weren’t enough to show their love for each other, Olsen-Plummer wound up catching an adorable bonding moment on video.

Jasper was sitting on the top of the couch, gazing out the window, when Bo jumped up to see what he was up to. Seconds later, Bo lifted his paw and wrapped his arm around Jasper as if he was giving him a hug.

The two of them sat on the couch, with Bo’s arm on Jasper’s back, as they looked out the window together. A heartwarming moment and true testament to their amazing friendship.

“I was super excited to catch this beautiful bonding moment of two animals showing love for one another,” Olsen-Plummer told ViralHog. “It needs to be shared with the world. I want people to remember to slow down, live and love in the moment with who you are with.”