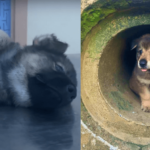 When owners don’t care to neuter or spay their dogs, their unplanned litters are sometimes discarded, especially in poor countries. The unwanted puppies are forced to care for themselves or wait for rescue. In this story, which is re-enacted in a video by Animal SafeGuard, two puppies were abandoned through no fault of their own.

A farmer who rescues animals in his spare time was out and about watching children flying kites. He suddenly saw, out of the corner of his eye, a puppy wandering around. He was by himself and happy to see the man. His tail wagged like crazy.

But when the man tried to pick him up, he ran away. When the rescuer followed, the puppy kept going. Was he leading him somewhere? YES, he was! That is when he saw some dog waste and then a sewer pipe nearby. Upon further investigation, the man sees what the puppy is trying to tell him. He has a sister too! And his sister needs rescuing as well.

The loyal puppy did a great job! He knew that a human was exactly who he needed to make sure they’re both saved. The little girl puppy was afraid though. She kept running back into the pipe, out of fear and out of uncertainty.

But finally, the adorable puppy allows her rescuer to help. What comes next is exactly what you’d want to see! The pups are cared for and housed until the rescuer can find them forever homes.

Thank you to all the generous animal rescuers out there. To see the story, scroll on down but remember that this is a re-enactment. When these animals are truly rescued, there’s no time for cameras and photo ops!