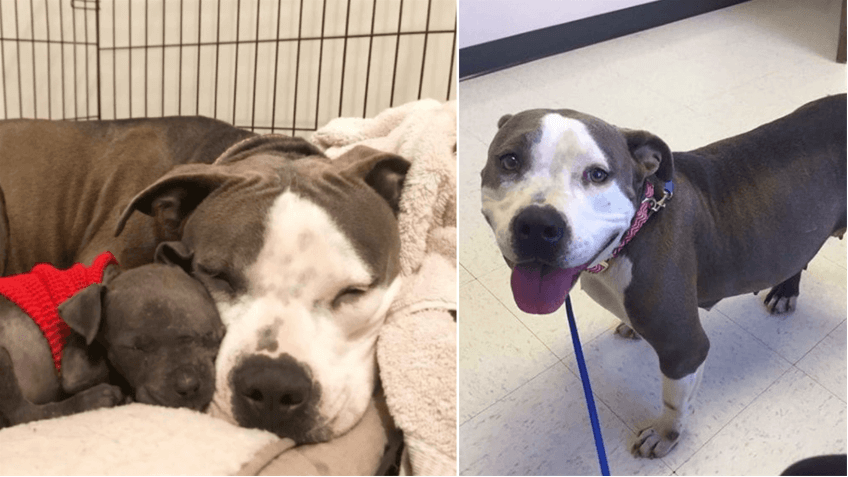 Animal Control officers picked up a stray pregnant Pit Bull and contacted a local rescue to invite her in instead. The rescue wanted this sweet mama-to-be to give birth in a comfortable setting rather than a scary shelter.

Halfway There Rescue decided to take Daya into her shelter. However, Daya tragically lost her babies in utero and also had a bad infection which required surgery.

Daya was able to recover and everything went smoothly. She went on to live with a foster where she could recuperate. Daya was now safe, but one important thing was missing: her babies. The staff noticed that Daya would take in socks and toys and act like they were her babies, perhaps to fill the void.

But what would fill the void even better would be a real puppy. Enter Raisin. Raisin was an orphaned puppy that Halfway There took in after finding her in the road. She had a ruptured eye that needed to be removed, and she was in need of a mother.

The rescue saw this as the perfect opportunity to give Daya what she’s been wanting – a tiny puppy to mother and raise. Daya and Raisin hit it off and the two of them bonded right away. Daya was the mother that Raisin never had, and Raisin was the baby that Daya had been longing for. They cuddled every second and helped each other heal.

The two of them went to live with another foster together where they would continue to heal. But as they got older, they started to drift apart. Probably because Raisin was now old enough to find her own way. Soon after, Raisin’s foster family decided to adopt her! Raisin now has an older doggy brother named Charlie who she gets along great with. Her parents give all the credit to Daya for teaching her out to act with other dogs.

Daya went on to live with her original foster, who then decided to adopt her as well! Daya now has a doggy sibling who suffers from anxiety, but she does her best to help calm his nerves. The two of them are the best of friends. Daya and Raisin helped each other get to where they are today. They are both loving their new homes and are living the best life ever!

Please be sure to ‘SHARE’ this story with a fellow friend or family member! 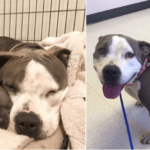