An Arizona resident with muscular dystrophy spends a lot of time at home and depends on his dogs for company and companionship.

When his dog of nearly ten years passed away, he was left devastated and lonely.

His other older dog also grew depressed since his sister’s passing. He figured that getting a younger dog would keep both him and his dog company, and would be a great addition to the family.

That’s when he decided to adopt Peanut, a dog who had spent 12 days in a high-kill shelter and was on the list for euthanasia.

When she first arrived at their home, she was very timid and afraid of everything. But within two weeks, Peanut was settling nicely into her new home and feeling way more comfortable.

In the video below, you can see just how much Peanut loves her dad. She is sitting on his lap, smothering him with kisses. She is beyond grateful that he rescued her from euthanasia and gave her a second chance at life!

Elderly Man Pushes His Disabled Dog On a Cart So He Can Still Go For a Walk
Spotted Dachshund Puppy Goes Viral For His Unique Markings
mohammedltc
Related Posts
0 3 0
July 3, 2022
0 7 0
July 2, 2022 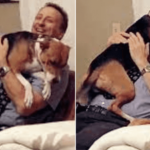