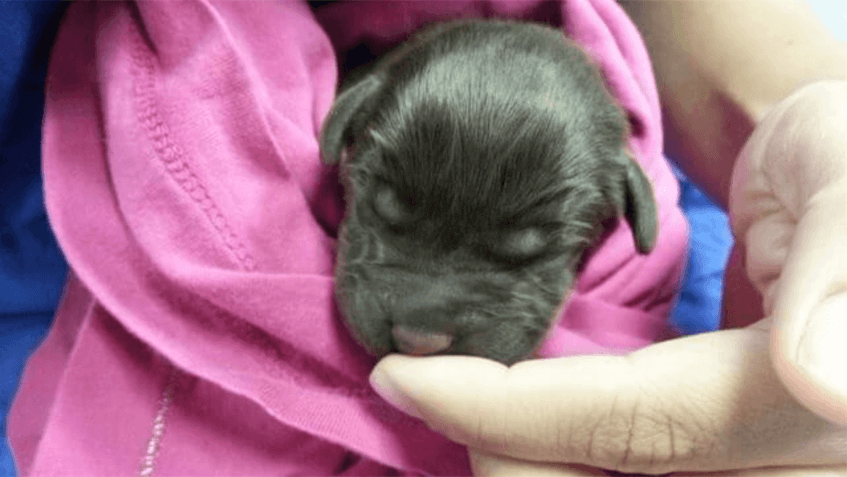 Humane euthanasia is an option when an animal is in pain and has no quality of life. It is also an option for a puppy like Bronson. Bronson was born via cesarean section with his brothers and sisters. All were healthy except Bronson.

The newborn had a cleft palate and his prognosis was poor. Surgery was an option down the line but getting him to nurse properly in the meantime would be an impossible task. To make sure he survived, and thrived, until he was old enough (and strong enough) for surgery would be challenging.

The owner chose to euthanize him.

But one person wouldn’t hear of it. Vet technician, who goes by kaffekalle on Imgur, wanted to try to save the tiny pup.

“I took him on knowing he may not live. On my 30th birthday, a chocolate lab had a c-section at my veterinary clinic and had 9 puppies. One of those puppies had a cleft palate, and the owners opted to euthanize the puppy. Knowing the sucker I was, another vet tech got the family to sign the puppy over and got me to foster the puppy. Here is my chocolate shake and chocolate lab puppy.”

The vet tech was warned that Bronson’s survival was uncertain but she had to try. She wrote on Imgur:

“Depending on the severity of the cleft, and if it affects the hard or soft palate, puppies usually do not thrive. The space in the roof of their mouth does not allow them to suckle properly, and they eventually die of starvation. This little chocolate bean had no idea he had some bad genetics and latched quickly to his binky.”

By getting his muscles used to the binky, Bronson was able to feed. “At this point, I have been up every 1-2 hours religiously tube-feeding this little boy with a red rubber tube and syringing Esbilac (puppy milk replacer). I am exhausted, but realizing my little ‘science experiment’ might actually survive.”

“This little boy traveled to work with me every day. Being that I worked in a veterinary clinic, it was easy to feed and stimulate him every 2 hours. He really loved his binky.”

At 3 weeks old, Bronson was making unexpected strides. He was surpassing expectations with flying colors! “At this point, I’ve decided that this little boy was a fighter. He was starting to scream for his feedings and would come barreling out of his kennel with his little legs.”

The vet tech’s photos and story won hearts — including her own!

“Bronson is starting to look like a real pupper. I LITERALLY CAN’T EVEN AT THIS POINT.”

“[He] is starting to get into [stuff] and running around the house like a madman. I get him this superman t-shirt to watch him fly. He’s absolutely naughty and I love it.”

Despite his growth and spirit, Bronson’s mama was worried about the impending surgery. “Bronson’s cleft palate was a particularly bad one – it extended from his hard all the way to his soft palate. The surgeon I worked with was a little skeptical about my taking this type of genetic defect on, but was also wanting to see how he would do. He would continue to monitor Bronson’s defect so we could decide a day for surgery.”

Bronson continued to go to work every day with his mom and he quickly became a staff favorite! And like a typical pup, he got into a wee bit of trouble.

“He started to become super obsessed with putting EVERYTHING in his mouth. I realized the [trouble] I got myself into, with having a mouthy lab that had a hole in the roof of his mouth.”

As Bronson got bigger, so did his cleft. Surgery was inevitable.

Even though he was a complicated case, Bronson came through surgery like a champ!

And look at him now!

“Here he is today with Layla, his 12 year old pit X sister, and Harley, his 10 year old border collie brother. The tissue is almost completely healed, he is able to play with toys, chew on raw hides, swim in lakes, go on walks, bring me sticks…basically live the rest of his life as a perfectly normal lab… I love my dogs.” 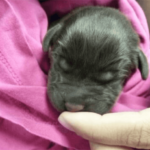