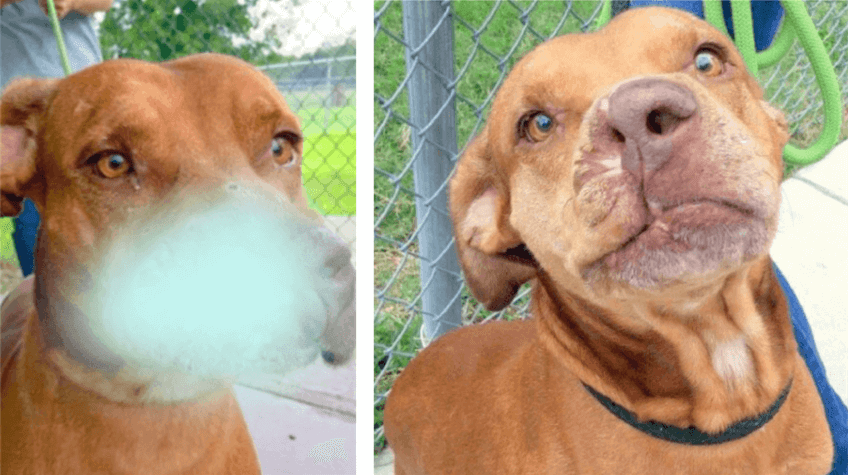 This is the story of a dog, Bjarni, who was rescued from a difficult home with a disfigured face. Despite being ignored by passersby at first, those who one who found this dog’s story saw it as a worthy cause to support. There seems to be no immediate danger to the dog as he is cared for in a foster family before being adopted out into his forever home.

Bjarni had half a nose and many bite scars, likely from an attack by another animal. He was struggling to eat and breathe. When tracked down, his owners refused to take him back, even when told of possibility he could be euthanized.

St. Francis’ Angels, an emergency foster-home organization in Houston, Texas is one of the few organizations that will take ill pets off the streets so they can get help before they’re surrendered to a shelter. One weekend earlier this month, founder Annie Graber took in a pit bull who had hydrocephalus and other health problems.

After surgery, Bjarni’s face is completely re-aligned and he can breathe and eat properly! Despite having harsh experiences, Bjarni is the friendliest dog in the shelter. “Vivacious and engaging. He is totally unaware of his limitations and disfigurement,” Anne told the Huffington Post.

Update: We’re happy to say that Bjarni has found a nice forever home with a family that is accepting of him and is filled with love! He began his new life with a new name ‘Hogan’. 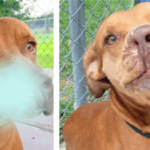