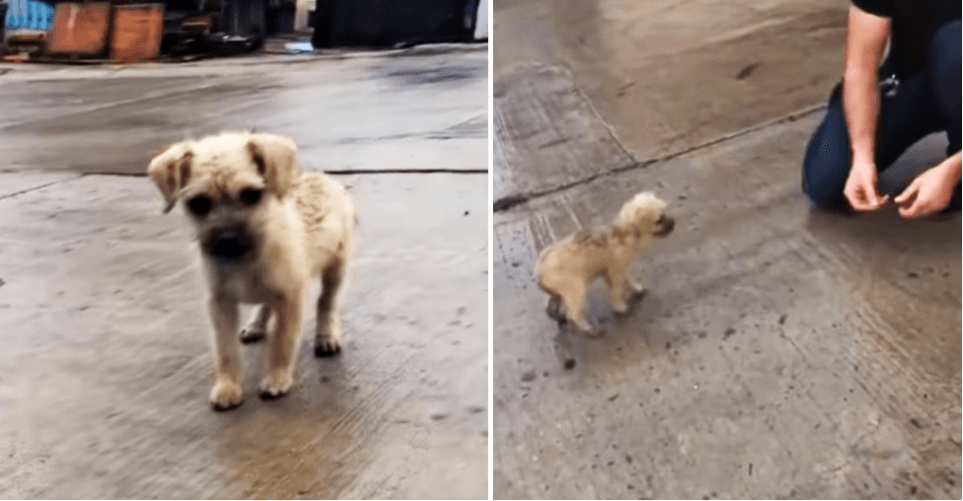 Rescue groups across the globe work tirelessly to change lives. One group responded to a call about a small puppy. He was found all alone, soaking wet, and obviously hungry. A pup as small as he is even more susceptible to tragedy. Especially since he likes to greet people by running in the street. It was only a matter of time before he was hit by a car. Something had to be done. Fast!

The rescue group, We Saved A Puppy, raced to save the baby. They named him Stormy because they found him in the pouring rain. He would run to them, tail wagging, but as soon as they tried to pick him up, he retreated.

The rescuers continued to try and pick up the puppy. Finally, with a trail of food and quick moves, they could grab him. He is so precious!

They took Stormy to the vet right away. The poor baby was covered in fleas. His blood work showed he was anemic due to the flea infestation and not having a proper diet. Stormy is given dewormer and medication for anemia.

The next step is a flea bath. YAY! Those creepy crawlers need to go! Plus, Stormy is dirty from being on the streets. He’s going to feel so much better!

They dress him up in a cute dinosaur onesie to keep him warmly! Next, they posted his photo on their social media page and adopters jumped at the chance to take him home.

The sweet pup finds a wonderful mama. Look at how big he got! WOW! See what happens when rescuers step in and stop at nothing to save a life!

We love that this little one got his happily ever after! 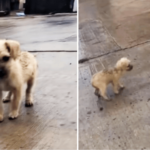