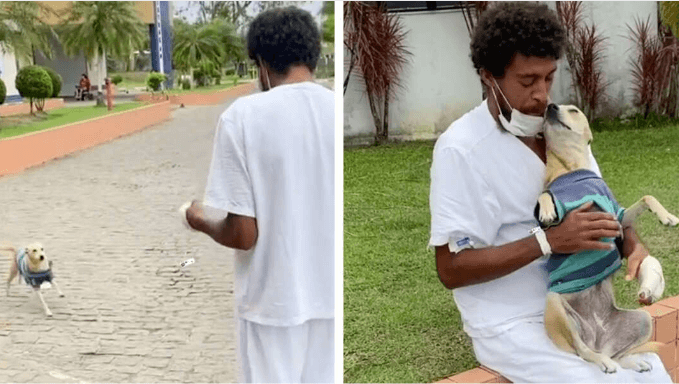 The Santo Antônio de Jesus Regional Hospital personnel in Brazil started observing what looked to be a stray dog loitering quietly outside last month. The dog appeared to be in wonderful health, but she was never with anyone else.

She was, however, there waiting for someone special.

The medical staff decided to feed and water the abandoned dog during the ensuing weeks; they later learned that the dog’s name was Mel.

Mel belonged to a homeless man who had been taken into the hospital for treatment, it turned out. She had faithfully seated herself in the waiting area after watching as he was led inside the doors.

When medical officials became aware of this, they made the decision to plan a touching reunion to put an end to the dog’s protracted vigil.

Mel was overjoyed to be in her closest friend’s embrace once more. While his therapy is still going on, she is grateful that her wait is finally over, at least in part.

The two are now given the opportunity to interact daily.

The length of time Mel’s owner will need to stay in the hospital before he and his dog can be reunited permanently is unknown, but the team is aiming to send the two home with some extra support. To help them get back on their feet, they’ve created a fundraising page.

Although the owner of Mel’s may not appear to be particularly wealthy on the surface, it is obvious that he is wealthy in ways that are more important. 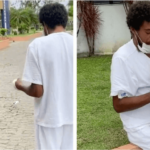