Dogs are such intelligent, protective animals. That’s especially true for sheep herding dogs, who have an important job of watching over their flock and protecting them from harm.

Recently, one heroic Great Pyrenees herding dog went above-and-beyond, saving the sheep by fighting off a pack of 11 wild coyotes.

According to 11Alive, a pack of coyotes appeared at a home in Decatur, Georgia on November 3, going after the owner’s sheep. Homeowner John Wierwille said he was initially able to scare them off, but the coyotes came back later that night.

But thankfully, his 20-month-old Great Pyrenees livestock herding dog, Casper, was there and ready to defend the flock against the attacking coyotes.

After the coyotes got into the pen, Casper put up a fierce defense. The animals fought for 30 minutes, and Casper reportedly killed 8 coyotes. But the dog also suffered his own injuries, all to protect the sheep.

The remaining coyotes fled, and Casper took off after them, leading to the owner fearing that the dog had died in the battle. But after a search, John found his dog, alive but greatly injured.

“He looked like death, I mean he looked terrible,” John told 11Alive. “He came back home and he just kind of looked at me like ‘boss stop looking at how bad I look, just take care of me.’”

Casper suffered serious injuries to his back and neck, and also lost his tail. Vets and family were initially unsure if Casper would make it, saying he was found in “bad, bad condition.”

But despite the odds against him, Casper has been making a slow but steady recovery.

Online fundraising reportedly covered the cost of Casper’s medical bills, which will cost about $15,000-$20,000. Casper still has a few months of recovery left, but for now he’s in good spirits and is being praised as a hero.

We’re wishing hero dog Casper a quick recovery — thank you for defending these sheep when they were in danger! 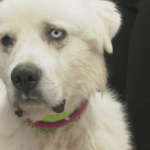