Veteran Larry Peteet and his depression and PTSD-support dog, Sandy Girl, became the victims of an unfortunate car crash in Florida. While the dog was unharmed, Larry had sustained gruesome injuries. The cops rushed him to the ICU, and they placed Sandy Girl under the care of a neighbor.

Soon after the cops departed, the neighbor gave the dog away to a person she met in the dog park. She told him about Sandy Girl’s sad circumstances, and clarified that she couldn’t take care of the dog because she had to leave the city. In the meantime, Larry gained consciousness and was devastated to learn that his beloved service dog had been given away.

Despite his frail health, Larry refused to rest. He hired Jamie Katz, a pet detective, and they began looking for the person who was supposed to be holding on to Sandy Girl. But their investigation came to a dead end when they learned that the dog had been passed on from one person to another in this short span of days, and was now untraceable.

Larry and Jamie didn’t lose hope and they kept persevering to find Sandy Girl’s whereabouts. After 22 days of restless search, Jamie finally tracked down a far-off animal shelter that had just taken the dog in! Larry dropped everything and dashed to the shelter to collect his precious companion!

In this video, we see a heartbroken Sandy Girl in an enclosure with the other dogs. When she sees Larry’s familiar silhouette at the gates, she gets excited and begins hopping again. As Larry walks toward her in tears, the dog simply jumps to him and breaks down in his arms!

Poor Sandy Girl is weakened after spending the worst few days of her life, but that doesn’t stop her from kissing and cuddling Larry like an enthusiastic girl! Larry and Sandy Girl’s story is both poignant and miraculous. This is the kind of reunion that stays in your heart forever!

Click the video below to watch Larry and Sandy Girl’s blissful reunion after 22 days! 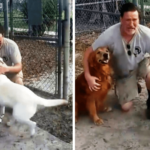