Everyone says they have the best dog in the world, and everyone is right. All dogs are the best dogs, but a Siberian Husky named Hel just went to the top of the pack. Hel’s owner, Terry Walsh, took the dog for a walk as he always does at a Birmingham park in the United Kingdom. All of a sudden, the dog sniffed something, went over to follow the trail, and gently nudged his snout at something on the ground.

Hel wound up finding an abandoned baby all by himself, and it is believed he was a newborn and dumped his by his mother. The baby appeared to be a few hours old and certainly would have perished if the curious heroic dog did not come along. In the meantime, Walsh and many U.K. citizens are praising Hel for his detective work in saving the baby’s life. Hel’s dad called his dog “sent from heaven to rescue a newborn baby boy.”

People in the United Kingdom are flooding social media with messages of praise for the heroic Husky. They say things like, “This dog needs a medal” and “brilliant job by all.” Walsh is a 64-year-old semi-retired royal engineer who shared, “Suddenly I heard this baby cry. I think it was Hel’s gentle nudging and the heat from my Husky’s body that woke the baby up.”

He is grateful that Hel found the infant while he was still alive, and he told all of his neighbors that Hel was sent from heaven to be a hero. Walsh also feared the baby would be eaten alive by wild animals or torn apart like a rag doll. He wondered how someone could do that to an innocent baby. West Midlands Police are investigating and searching for the baby’s birth mother.

Congratulations on a job well done, Hel. You are a canine role model! 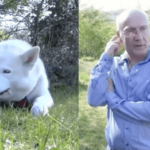