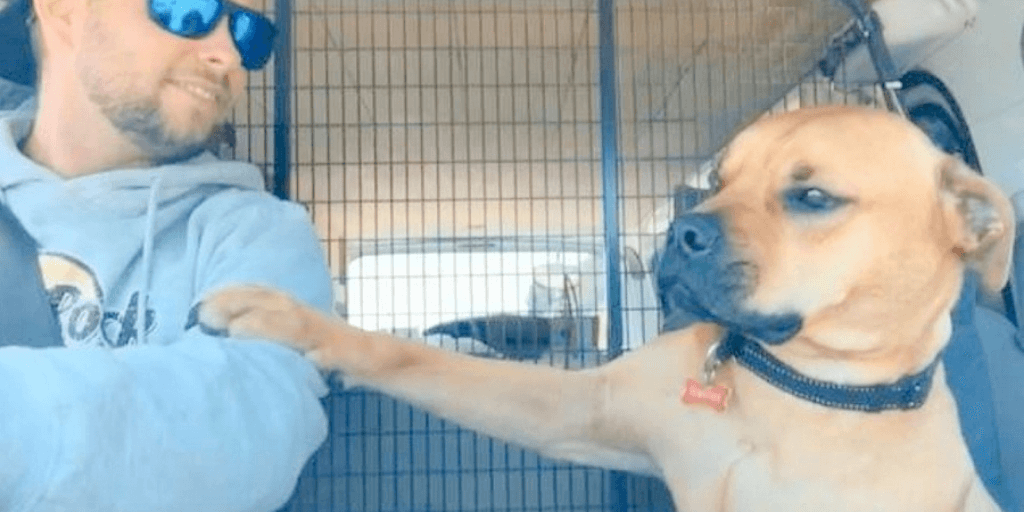 Sam Clarence often volunteered as a dog-walker in a nearby shelter. That’s how he met the painfully shy Stanley, a Bully breed rescue dog. Sam knew that the skittish Stanley was going to be a “foster fail”, so he decided to take him home.

Stanley took his own sweet time to come out of his shell, but when he did, there was no stopping him. Stanley became a sweet and loyal companion over the months, and even befriended other humans and dogs.

But nothing could beat Stanley’s special love for his dad. Stanley insists on holding Sam’s hands all the time, be it playing, watching TV or even sleeping. Sam too doesn’t mind pampering his fur-ball with all his love.

When driving, Sam struggles to keep his eyes on the road, as the adorable Stanley would persistently place his paws on Sam’s arms! How cute! No wonder, Sam calls him “Velcro Dog”.

Today, Stanley is an older pooch, but that hasn’t lessened his neediness for Dad even by a bit. After spending years of harsh and lonely time on the streets, Stanley could hardly care for any alone time now! His affection for his dad is the sweetest thing we’ve seen today!

You can watch this incredibly sweet video of Stanley holding on to Sam’s arm by clicking here.