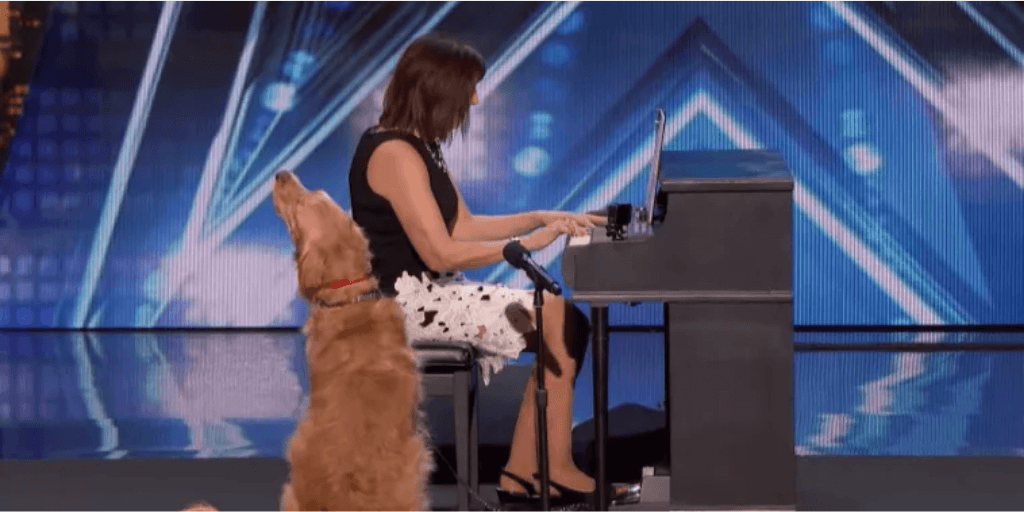 From sniffing out explosives to performing challenging acrobatics, dogs are known for pulling off impressive tricks. They learn a lot more than the basic “sit” and “stay,” and a three-year-old dog named Oscar took his talent to a well-known stage. Accompanied by his person, Pam, Oscar was a contestant on “America’s Got Talent.” He had an opportunity thousands of people can only wish for—to sing in front of famed critic Simon Cowell. He didn’t let his time in the spotlight go to waste.

According to Pam, who also provides the musical accompaniment for Oscar, Oscar began singing on his own about a year and a half ago. He was playing the piano in his living room when his merry puppy decided to join in. Since then, Oscar has benefited from the singing lessons. Pam said:

“He can sing. He can hold a note. He can even do a vibrato.”

Known for his surly attitude and harsh criticism, Cowell was surprisingly interested in the singing dog. He said during the show:

“I’m not kidding, I’ve done this show a long time and I always said if we could find a dog that could sing, that would be everything to me.”

The pressure was on to impress the panel of judges, but Oscar showed no signs of stage fright. The audience “awwed” in unison when the adorable dog decided to lay down on stage during all the talking, and he seemed ready to go by the time Pam took her seat at the piano.

Oscar confidently performed his canine rendition of Pachelbel’s “Canon in D Major.” Tyra Banks marveled from backstage about how the singing dog was actually on key. When the song ended, Oscar was awarded with a standing ovation. Even Cowell himself stood up to show his appreciation.

Cowell praised Oscar’s singing, but true to himself, he couldn’t go on without first critiquing the piano playing. Overall, Oscar and his human partner seemed to please both the audience and the judges. Who knows, maybe a record deal is in Oscar’s future.