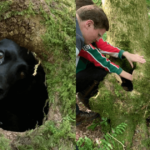 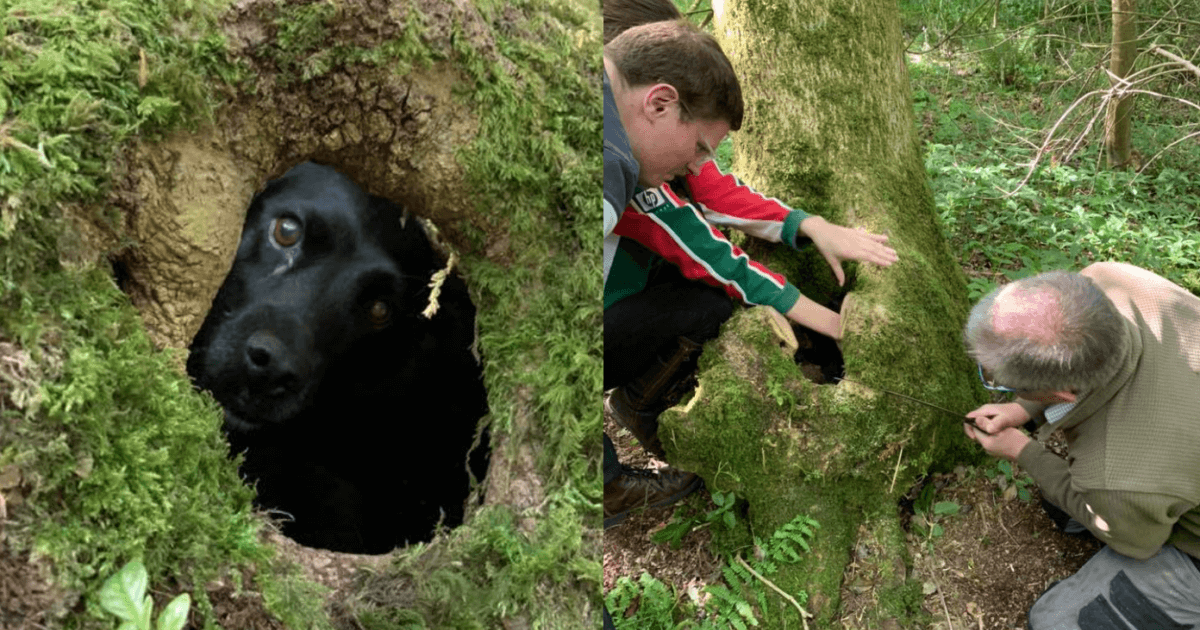 Sometimes dogs can really wow us with the bizarre places they manage to get stuck in. Bless their hearts, but pups don’t usually think of an exit strategy when they dive in somewhere head-first. Most of the time that’s fine when it’s a lawn chair or a drying rack. But getting weirdly stuck somewhere outside is a different story. And that’s what happened to Teazle, a Spaniel/Terrier mix from Dorset.

One day in May, 8-year-old Teazle went missing in Delcombe woods. She’s a dog who likes to do her own thing, so her mom Clare Tredrea wasn’t worried when she wandered off at first. But later when Teazle didn’t come back home with the other 2 family dogs, Tredrea became concerned.

She told The Daily Mail the pup had been chasing squirrels before she vanished.

“She is always chasing squirrels, she loves it. She doesn’t usually chase them far though because she only has short legs. But when I got to the top of the drive and Teazle still wasn’t with me, I started to panic and we went out searching.”

No one had any idea where in the woods poor Teazle had gone.

Since there aren’t roads nearby, Teazle’s family didn’t think someone would have picked her up. So they searched and they searched, scanning the entire area. But no one saw or heard from poor Teazle.

“We were out searching for her until about 10 that night. We were searching and shouting for her and there was just nothing coming back. She never made a peep. It was so upsetting.”

The family began to fear the worst. Poor Tredrea slept on the floor of the kitchen, waiting for Teazle to come back home.

The next morning, they started their search again at 5 am. The family checked every badger den, fence line, and hiding spot they could think of. Then, Tredrea’s son Jack noticed something: “beady eyes” from the bottom of a tree.

Yep- Teazle had gotten herself stuck inside of a tree root! Even though the family had walked by her several times while searching, no one noticed the black dog in a hole.

“You had to be stood basically on top of the roots to see her. You couldn’t see her from any other angle. By some stroke of sheer luck, Jack had managed to stop in exactly the right place. It was pure fluke. She is the luckiest dog.”

The poor thing had gotten herself so completely stuck in a U-shaped root. Tredrea shared photos of trapped Teazle, “the luckiest dog in Dorset” on Facebook.

“She’s spent the night trapped in a tree root, very firmly wedged. I think she had been chasing a squirrel up a tree and slid down into hole bum first. We had walked within ten feet of her on numerous occasions last night and this morning and she hadn’t made a sound.”

Freeing Teazle From Her Tree Tomb

Now that they located her, it was time to free Teazle from her tree prison. The family spent the next 45 minutes sawing away at the tree root.

To distract Teazle, Jack’s girlfriend Emma protected her head and spoke to her. Eventually, after they’d broken through the thick tree, they were able to lift Teazle out of the root unscathed. Tredrea noted, however:

“But if we hadn’t found her, Teazle would have definitely died in there. We’ve started calling that tree Teazle’s tomb.”

Maybe it was good luck, or maybe fate that Jack stood exactly in the right spot to notice the silent, stuck pup. Either way, the family is so happy to have their girl home safe and sound!*

In addition to miraculous luck, Tredrea emphasized the importance of vigilance when looking for a missing dog:

“It just shows you really do have to look everywhere. We had checked every fence line, every hole we knew of, the undergrowth. We never thought to check the trees.”

Now that Teazle’s out and safe, it’s probably okay to laugh on how ridiculous the photos of her stuck in a tree trunk are. They certainly top the list of weirdly stuck doggies!