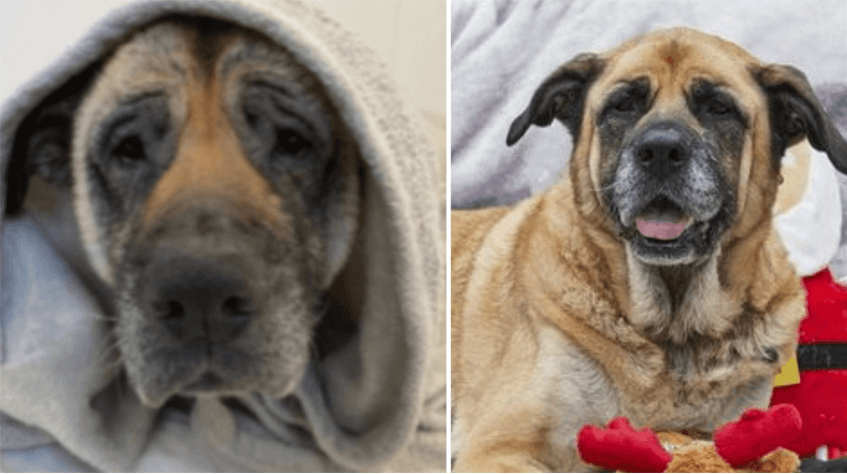 It’s sad to think about all the dogs who are in shelters, just wishing someone would give them a loving home. It’s especially sad around this time of year to think of all the pets who won’t have a home for the holidays.

Last year was definitely a blue Christmas for one poor dog, who was abandoned just days before the holiday. But this year, she’ll be spending Christmas with a loving family after her life turned around.

Molly-Moo, a German Shepherd cross mastiff, was found last December by police in Birmingham, England. The dog was in terrible shape, and was seemingly abandoned on the road by neglectful former owners.

“Molly was wandering along a busy, dangerous road and I believe she’d been dumped there by someone like rubbish,” RSPCA inspector Stephen Lee told Sky News. “She was incredibly emaciated, with bones protruding, and had a bad, untreated skin condition.”

After being found, police traced her microchip, and discovered she had been stolen from her original home six years ago. Unfortunately, the original owners were unable to take her in, so she ended up at RSPCA’s Birmingham Animal Hospital.

“Whoever had her recently has clearly neglected her as she was so thin with her spine and ribs visible and she also had an untreated skin condition,” Lee said in an RSPCA Appeal last year.

“Then it appears they decided to dump her at the side of a road – which must have been terrifying for her.”

Not only was it heartbreaking that the dog ended up in a shelter just days before Christmas, but Molly-Moo’s poor condition meant that she had a long road to recovery ahead. Luckily, she was now in good hands.

Vets set the emaciated dog with a diet to help her gain weight back, and also gave her treatment for a skin condition.

And then it was time to find the dog a new home, one that would give her the love she deserved. Thankfully, she found a perfect family.

John Bebbington, from Leicester, saw Molly-Moo’s photo online and was moved by her story. It also felt like a sign, as John and his family had recently suffered the loss of their own pet dog.

However, the family was patient and understanding.

“There were times when we thought: ‘What have we done?’ but then we remembered what someone had done to her and how she deserved a happy and healthy life,” John told Sky News.

A dog dumped on a dangerous road "like rubbish" is now "happy and healthy" after finding a new best friend for life https://t.co/B3TnapfUTY

But now — nearly a year after Molly-Moo was found abandoned — everything has worked out. Molly has warmed up to her new home, and is a “totally different dog” who is sweet, playful and well-behaved.

“She’s an older girl but it doesn’t stop her bounding around through the grass and it’s an absolute joy to see,” John said.

After surviving so much, Molly-Moo will never have to worry about being abandoned again: “I’ve definitely found a best friend for life and she has, too.”

We’re so glad that Molly-Moo is safe and sound, and has a loving family — she’ll never spend another Christmas alone.

We Love Animals is now on Instagram! Follow our page for more inspiring stories and adorable photos!