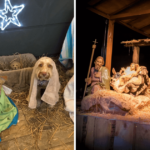 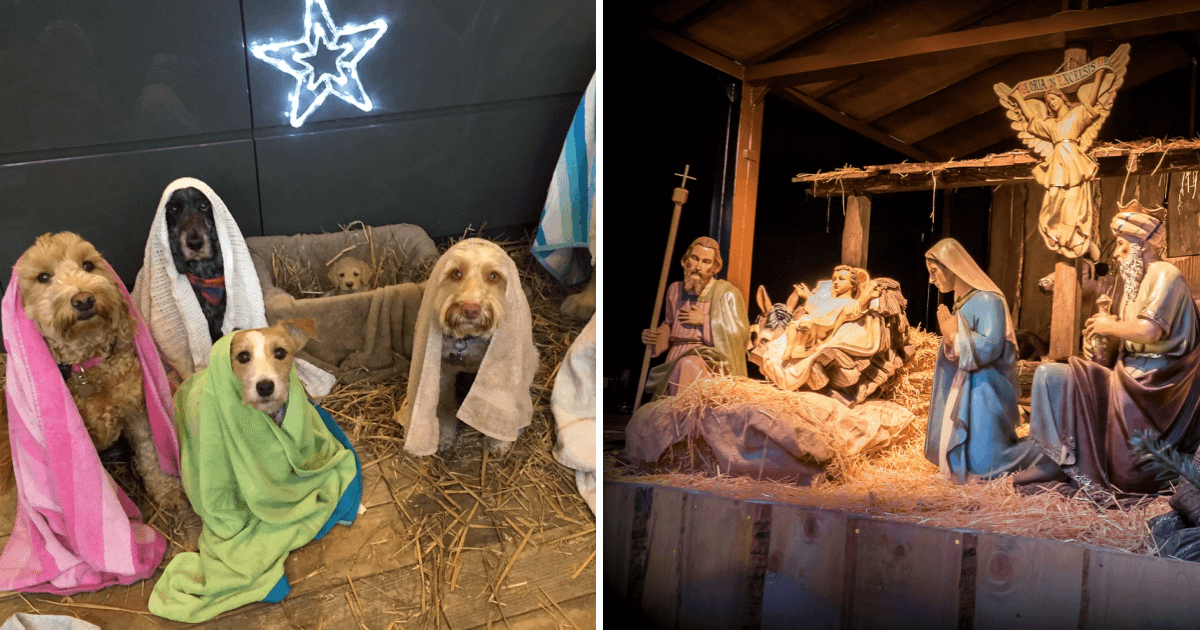 The tree is lit, the decorations are up, and the Christmas season is in full swing. But nothing celebrates the true meaning of the holiday like displaying a Nativity scene.

The scene of Jesus’ birth in a manger, surrounded by animals and wise men, is a staple of the holidays, whether it’s light-up figures on your lawn or Sunday school kids reenacting it live at mass.

But sometimes people get a little creative with their scenes… like one dog groomer who made the most adorable Nativity scene the internet has ever seen.

Jo Kingston runs a dog walking and grooming business called Wags to Riches in Leicestershire, England. Around Christmas 2017, the business went viral thanks to a very funny photo.

The groomers decided to take their beautiful dogs and make an all-canine Nativity scene!

Costumes were simple enough: the dogs were wrapped in towels to look like the robes of a traditional Nativity scene.

Probably the cutest part of the whole thing is a tiny puppy sticking out of the manger, playing the Baby Jesus.

The internet quickly fell in love with the pic, which has been retweeted over a thousand times.

“I woke up and somebody tagged me in this photo saying, ‘Jo, you’ve gone viral,’” Jo told the BBC. “I’ve had so many people messaging me.”

“I didn’t expect this at all.”

2000 years ago in Judea. (Now called Israel) something very special happened.
There was a young women called Mary and she had a visit from an Angel called Gabriel……(make sure your sound is up) x pic.twitter.com/QKk9VVG1Gh

Anyone who’s had to wrangle up kids to stand still for a Nativity scene knows how hard that can be, but apparently the dogs were perfect actors, as long as they got a treat.

“They were all happy to sit for the photo,” the owners told The Dodo. “It’s amazing what dogs will do for a biscuit.”

It was such a success that the groomers have made it a Christmas tradition, putting together another Nativity in 2018:

They’ve even expanded to celebrating other holidays and events, like New Years, Valentines Day and the Royal Wedding.

Happy new year to you all from Wags to Riches HQ! pic.twitter.com/PvBWBuVCIt

We are so excited about the royal wedding here at Wags To Riches, we decided to recreate our own wedding at doggy daycare.. 🥂🎂🌞😊🐶🐶xx pic.twitter.com/PYR6lEXAuZ

But of course, nothing can top the Nativity scene. We’re looking forward to seeing if they continue it in 2019!

What cute dogs! It’s a photo sure to put a smile on any animal lover’s face this Christmas!