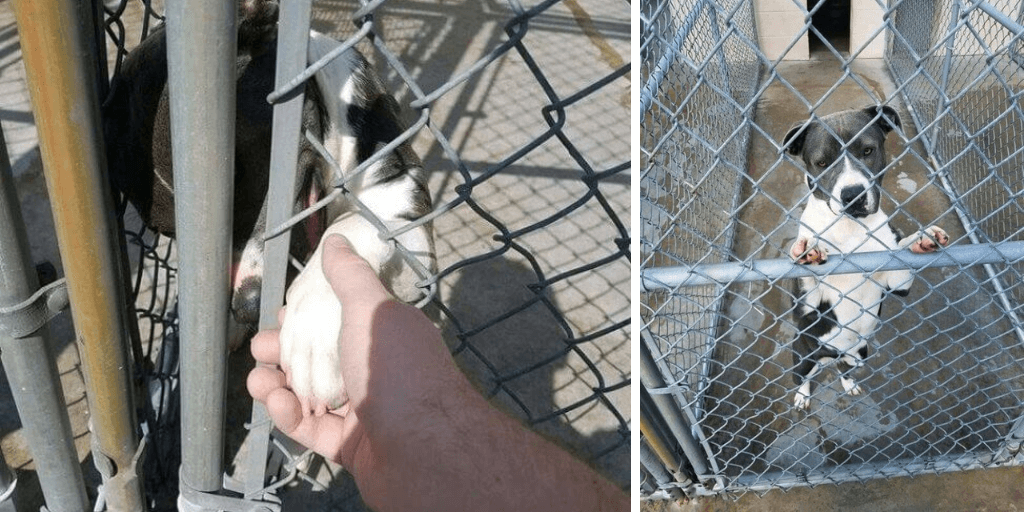 Sadly, not every family treats their dogs with respect. A sweet Pit Bull named Ellie thought she had a loving home. She came to her first family as a puppy, when she was adorable and irresistible to them. But as soon as she turned a year old, her loved ones turned their backs on her. They surrendered her at a high kill shelter in Tennessee, saying they no longer wanted her because she was “not a cute puppy anymore.” This broke Ellie’s heart, and she spent days wondering why her family had left her. She was much more shy and reserved than the other dogs at the shelter, so she continuously got overlooked. Soon, she was set for euthanasia, but one determined couple refused to let that happen.

Jon Patel hadn’t been planning to adopt a dog when he visited the shelter Ellie was at. He just wanted to have a look at the adoptable animals. Right away, he noticed that there were a lot of barking dogs, so his attention was immediately directed toward Ellie. She was quiet, calm, and keeping to herself. She almost looked defeated and hopeless. But Jon fell in love.

When Jon found out that Ellie was scheduled to be euthanized that same exact day, he couldn’t believe it. How could such a sweet, young dog die that way? Without hesitation, he called his wife Kayla to tell her about the situation. From there, the couple was able to hold off Ellie’s euthanasia date a few days while they prepared their home for her.

The shelter made it very clear that Ellie would be euthanized if Jon and Kayla didn’t pick her up on the day they promised. So, the couple kept their word and adopted Ellie as planned, which saved her life.

Dogs are for Life

When Ellie first entered her new apartment, she couldn’t believe her luck. She ran all over the place and jumped on the bed and the couch. But her new parents didn’t mind. They were just relieved to see her finally feeling happy again. After her initial excitement, she soon calmed down and cuddled with her new family members.

Ellie loves sleeping, playing, and following her humans around in her home. She always has to know where her mom and dad are, so she stays in the same room as them at all times. It’s likely because she loves them so much and wants to make sure they don’t abandon her like her last family did. Jon and Kayla also discovered that Ellie loves playing with bubbles. She’s such a little ray of sunshine.

“To this day, I don’t understand why anyone would give her up because she’s so sweet and loving. She’s never met a person or a tennis ball that she doesn’t love immediately,” said Kayla.

The couple admits that they sometimes get nasty stares from people walking by due to Ellie’s breed. But Ellie is just a sweet girl who will chase butterflies all day if she can. She wouldn’t hurt a fly.

Even though Jon and Kayla hadn’t planned on adopting a dog, they are overjoyed with their decision to save Ellie. She’s been the perfect addition to the family and they will never let her feel unloved again. Dogs are a lifetime commitment, even when they grow out of their puppy size, and Ellie is living proof of that.