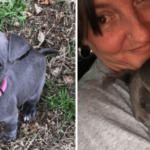 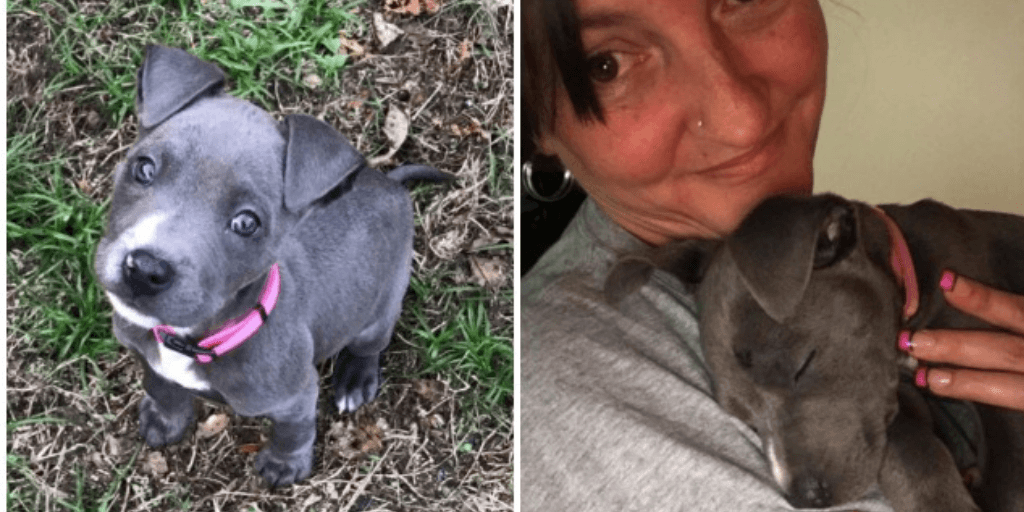 One unusually cold day in January in Daytona Beach, Florida, when temperatures dipped below freezing, an anonymous tip led animal control officers to a wet and VERY cold tiny Pit Bull puppy. They warmed her up in their police car the best they could with a blanket and their body heat, as well as holding her near the car’s vent so she could be heated by the warm air. Then, they took her to Halifax Humane Society. Police Spokesperson Lyda Longa told TODAY:

“She was found wedged between two rocks. She was soaking wet.”

Barry KuKes is the community outreach director for Halifax Humane Society. He added:

“She was basically freezing to death.”

Kera Cantrell has been a member of the Daytona Beach Police Department for 21 years. Visiting Halifax on her lunch break, Cantrell saw the puppy, now named River, crying in a kennel. She told TODAY:

Cantrell, who cried when she heard about River’s rescue, couldn’t take her home right away since she was so young and was still being bottle fed. Cantrell went in every day or two to check on River until she could take her home on February 2nd. River seemed to know she was going home forever, as she couldn’t stop licking Cantrell’s face.

River joins 3 other rescue dogs in Cantrell’s home: Goose, Duck, and Mojo. Now, Cantrell dresses River in sweaters and onesies so that “she’s never going to be freezing again.”

There have been no leads on who abandoned River. Daytona Beach Police Department would like to emphasize that people should reach out for help rather than abandoning an animal. Spokesperson Longa said:

“If someone does not have transportation, they can still call 911 and say that they have an animal to surrender and police will assist.”

Cantrell thinks that River might make an excellent therapy dog one day and she hopes that her story of survival will help inspire others.

“She survived it. She’s a fighter. She’s an amazing little girl.”

Be sure to check out River’s adventures on her Facebook page!