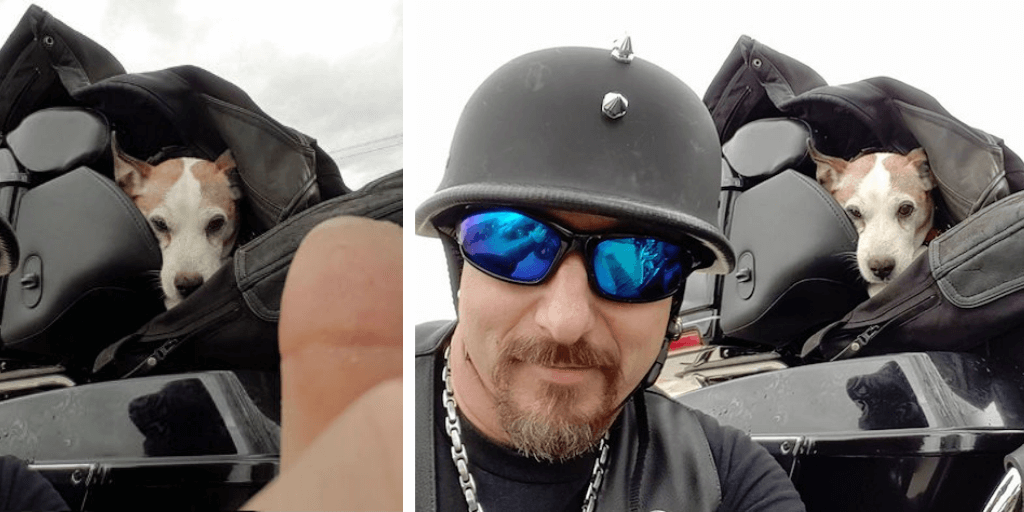 What would you do if you witnessed a dog getting abused on the side of the road? One Texas man doesn’t need to guess. When he observed a small dog on the receiving end of violence, he immediately took action.

This heartwarming story dates back to February 2016. Brandon Turnbow was out riding his motorcycle when he saw the unimaginable. Turnbow was riding his Harley Davidson on a trip to visit his father. Then, he witnessed a man abusing a small dog on the side of the highway near Cresson, Texas. Turnbow wrote on Facebook,

“[I] was riding out an saw a vehicle pulled over on 171 with a worthless piece of crap beating an innocent little white dog. I watched in my rear view and saw this guy throw the dog into the air curbside and drive off.”

He immediately pulled onto the shoulder. Thankfully, the dog was alive, but he was clearly terrified by the experience. Turnbow scooped up the pup and wrapped him in his jacket. Then he placed him on his Harley.

“I went after the guy just to give him a number one sign. And I now have a Co pilot- Meet Mr. DAVIDSON.”

The heroic rescuer named his new dog Mr. Davidson because “Harley” is the name of his other dog. Turnbow not only saved Mr. Davidson from abandonment and abuse, but he also wrote a song about the rescue. In his lyrics, Turnbow promises his new dog that he’ll never be cast aside again. Also, he says his little dog will get riding goggles and vest. Can you imagine anything cuter?

We love stories with happy endings! Listen to the sweet sentiment and watch Turnbow’s video below.