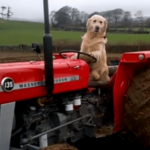 Rambo the Golden Retriever has turned his love for riding in vehicles into quite the little career! On any given day, Rambo can be found sitting atop one of owner, Albert Reid’s plows, mowers or tractors.

According to Rambo’s dad, people from their hometown of County Down, Northern Ireland flock to his home to catch a glimpse of the tractor-driving pooch.

“Nobody could believe it, when they saw it,” Reid told the UK Mirror. “They had to take photographs and video him. We have people that come to our yard who are just lost for words when they see him do his tricks, he is such a good dog as well. He is just too friendly and so welcoming with all the people that come round.”

Rambo has been Reid’s constant companion ever since he was a puppy. Whether working on the plow or riding into town in Reid’s Land Rover, Rambo has just one flaw. He refuses to climb into any vehicle. Instead, he waits patiently for Reid to lift him.

“His tail will go round like a helicopter because he will be so excited. But he just can’t get himself to jump into my car for some reason,” Reid said.