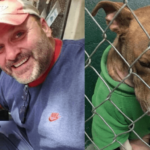 A sweet dog named Bobby surrendered to the Miami Dade Animal Services last year won the hearts of shelter workers and volunteers, but after two months of waiting, the dog moved onto the “code red” list. Things did not look good for the young Pit Bull mix until a photo of him looking dejectedly downwards wearing a green sweater went viral on social media.

The photo was shared by Urgent Dogs of Miami who was desperate to save him. “[V]olunteers thought if he put on this cute sweater, someone would notice him and save his life. […] He is so heartbroken & he broke our hearts too,” wrote the animal welfare group.

“Please don’t let this boy die here,” the photo’s caption read. “He deserves a second chance at life in a loving home with good people. We will sponsor his adoption fees to a loving home.”

Bobby’s photo broke everyone’s hearts and prompted many animal lovers into action. The shelter soon was rushed with people interested in saving him. One such person was Robert Miller, who works for a local rescue. He arrived at the shelter only to be greeted with the wonderful news that Bobby had just found another adopter!

Bobby’s new mom is Paola Mariaca. She regularly volunteers at the shelter and already knew about Bobby and his plight and decided she needed to take more personal action to help him.

“I took on the responsibility [sic] to adopt him because although I had been sharing and networking him, he was still at MDAS shutting down,” she wrote on Facebook. “Then he went viral, [which] brings out good people and bad people. After waiting so long, he deserves only good things from now on.”

Paola has taken Bobby to the vet already and he’s been treated for mange and an ear infection. She promises he will have a safe, happy home with her and her other rescue animals!

I’m glad Bobby ended up in the loving arms of Paola! Bobby’s story shows just how much the power of networking saves the lives of shelter dogs.