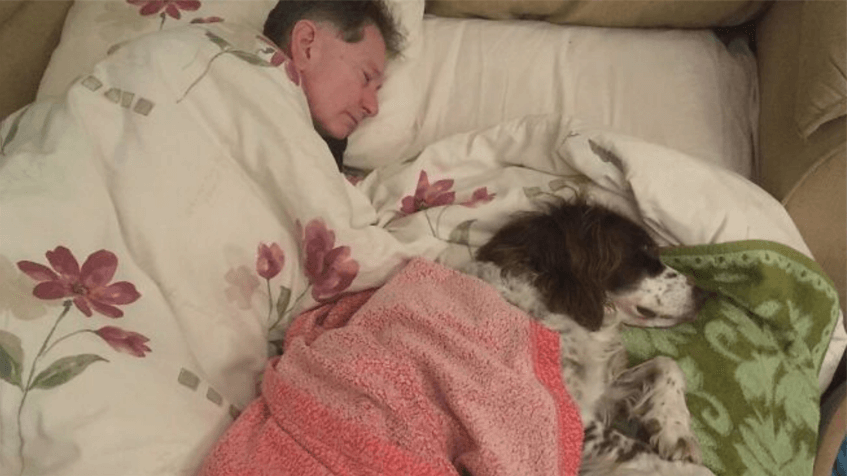 After the Morris family rescued a 5-year-old springer spaniel named Spike, they faced a situation many dog owners do. They had attempted to keep their new family member out of the bedroom at nighttime but the little guy persisted.

The family put up a little stair gate that they assumed would keep Spike downstairs come bedtime but alas, it was no match for a doggo who really wanted to sleep in the same bed as his family.

Spike finds a way into the bedroom.

“The first night we had him, we closed the stair gate and went to bed,” Catherine Morris, the family’s daughter, told The Dodo. “He whined for a couple of minutes before jumping over the gate in the dark and trotting up into my parents’ room and straight up onto the bed! And that’s where he slept from then on.”

Like most of us do, the family eventually gave in. You probably know how this works. At first, you are too tired to take the dog back downstairs and there is also a part of you who kind of wants them to sleep in the bed anyway. Even though you know it’s not good for your sleep to have a pet in the bed with you, you just love them too much to kick them out. Perhaps you think to yourself, ‘okay, just this one night’ but it’s never just one night.

Spike sleeping in the bed became a nightly routine.

Eventually, the family just accepted that Spike would sleep in the bed with Mom and Dad. He was 5 when they rescued him and had likely not known such love and affection from a family. We’re sure Spike was thrilled with his living situation.

“He loves to snuggle up and tries to push his way under the covers to get as close as possible,” Morris said.

Spike grows older after a decade of living the good life.

As with all dogs, humans, and other living beings, Spike got older with the passage of time. Now 14-years-old, Spike has had some health problems in his senior years. He’s had two strokes and his family doesn’t know how much time they have left with him. They don’t want to leave him alone and want him to always be with his family in his final days.

Spike’s second stroke made it hard for him to stand, let alone walk. While he regained much of his mobility, the stairs are a bit too much for him. Getting up to the bedroom is not something he’s able to do.

With Spike unable to travel upstairs for his nightly snuggles, Mom and Dad take turns sleeping on the pullout couch downstairs with him. Catherine is often away at college but when she comes home she’s part of the rotation as well.

“This new schedule started while I was away at university, so my parents spent alternate nights downstairs with Spike,” Catherine said. “Since I moved back home, I’ve joined the rotation so all in all we get a bit more sleep between the three of us.”

Dad will even bring Spike his food, water, and medication right to the sofa for him so he gets everything he needs. They really are a caring family. Spike will only know love in his senior years. 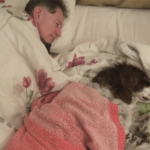