We can’t deny the deep, emotional bonds we form with our canine companions. Not only have these bonds proven to be profound and meaningful, but they’ve also been proven to withstand the test of time. This can certainly be said about “Jorge,” the beautiful boy who didn’t forget his dad despite being lost and living on the streets for three long years.

The video of the moment Jorge recognized his dad after being missing is capturing the hearts of animal lovers across the internet. Thousands of people have gushed about how heartwarming the moment is and how obvious it is that Jorge is so delighted to be home.

It doesn’t matter if we’ve been gone for a month or merely a moment; our pups are always so excited to see us. But the level of excitement captured on camera when Jorge was finally reunited with his dad was unmistakable.

Jorge made it so clear how much he missed his dad and that he didn’t forget his family despite his time away. His head and ears perked up the moment his dad called his name. Plus, his loud yips, barks, and cries were filled with emotion. He was literally jumping for joy. It’s almost as if you can hear how much his family means to him in his noisy excitement.

“We searched for three years,” Giorgi Berezian told The Dodo. “Then we found him!”

For three long years, Giorgi searched for his beloved pup, Jorge. He never lost hope that he would see his best friend again one day. He never stopped putting up posters, asking around, and searching the streets. That’s actually how his long-lost pup was found.

Employees of the Tbilisi Opera House recognized Jorge from his posters and realized he was roaming the streets nearby. They immediately called Giorgi and asked him to bring a picture of his pup to help identify him.

But when the “street dog” heard his dad’s voice, there was no need for proof. It was obvious his family had finally found him and that he was excited to be reunited with them after all this time. After three long years, they were finally together, and their emotional, heartwarming reunion was captured via photo and video.

You can check out the full video of their reunion below, but you’ve been warned. You’ll probably smile, but you may even shed a tear when you hear Jorge’s cries, and you realize just how much he missed his dad.

Abandoned Dog Dumped In Park Gazed Out Of Gate, Hoping Someone Would Help Him
Abused And Neglected Dog Runs Away From Home To Find A Life ‘Full Of Love’
mohammedltc
Related Posts
0 0 0
January 16, 2022
0 1 0
January 16, 2022 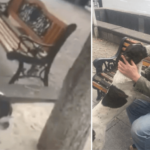