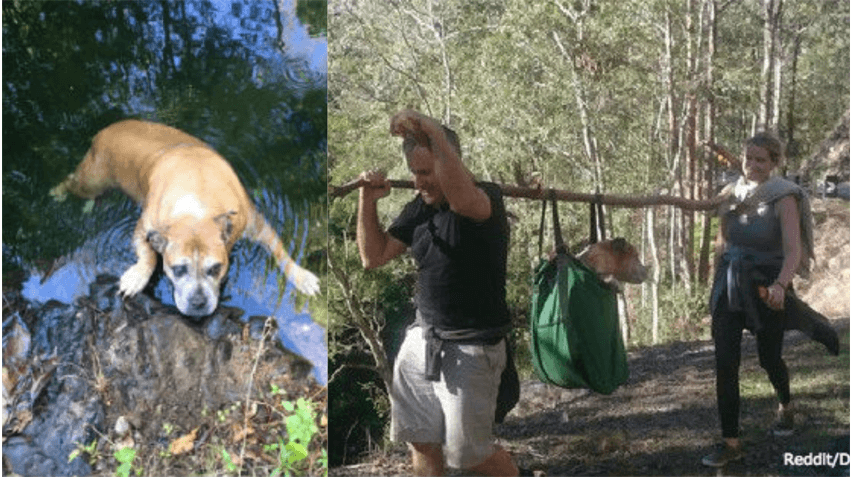 The Australian outback isn’t exactly forgiving, so when some bushwalkers came across a dog struggling in a rock pool in Queensland, they knew they had to act fast.

Reddit user Dangerm0use was walking through Mt. Glorious National Park with her husband and father when they found the exhausted dog. With no idea how long the dog had been in the water, where it came from, or whether or not it was even friendly, they got to work.

“Either way, we couldn’t leave it there in the freezing water. It was completely exhausted from its attempts to struggle out of the deep section it had fallen into, and there’s no way it would’ve survived the night,” the woman wrote.

Grabbing the biggest stick they could find, the hikers looped a rope around the dog’s head and shoulders and dragged her onto a rock embankment.

“The dog wasn’t aggressive at all, and in fact very timidly lumbered away from us, up the bank and into the thick lantana beside the pool,” she said. “We figured if she’d been someone’s pet, there was a chance she had been dumped or lost.”

The dog wasn’t eager to join the trio, but they weren’t about to leave her there.

“She was in a completely inhospitable section of bush, in a gully with cliff face and hectares of national park on one side, and a scrubby, rocky, unscaleable bank up to a busy road on the other. There were also no houses within at least a 5km radius, and no obvious way for her to make her own way out of the gully,” she said. “We saw her podgy little rump disappear into the lantana, giving us no other option than to wade in after her.”

They tried comforting the dog and letting her recover her strength. It was going to take more than just encouragement to get this 88-pound pup out of the gully.

“She was very dejected, and obviously still exhausted. I snapped away the lantana from her little nest, and gradually got in closer, letting her get used to us being there. She was still apprehensive, but not aggressive, so after a while I took a chance and gave her a scratch on the head … and she rewarded me with a lick on the hand,” the woman wrote. “Despite obviously having been camped there for at least a few days, we noted that our little companion wasn’t exactly lacking in mass, leading us to dub her Miss Piggy. We spent a bit more time getting acquainted with Miss Piggy, while we started to hatch a plan to get her out.”

With a strong rope and a few slip knots, they were able to make a harness and pull Miss Piggy out of the pit, over loose rocks and brush.

“The little sweetie showed her appreciation of our patience by wriggling over to me and resting her head on my leg. I hadn’t wanted to be too familiar with her to this point, but she gave me the go ahead to give her a reassuring cuddle,” the woman wrote. “It was becoming pretty obvious that she wouldn’t be able to make it up the bank unless we carried her, and so we were throwing around options for a harness and hammock set-up, using towels and ropes. My husband had a brainwave, remembering that we had a large canvas bag in our car (15 mins walk back up the creek). We figured that if we could get her into the bag, we could MacGyver together some apparatus to transport her out.”

Fastening the canvas bag to a large branch, the woman’s brother and father lifted Miss Piggy out of the gully and carried her back to safety. It took all of 30 minutes just to make the 3-meter vertical climb to the nearby street.

About 15 kilometers north of where the dog was found, her owner was still hoping for the best. Elly-Bobby, the dog’s real name, had gone missing on June 30, and was found on July 23. The hikers had no idea what she had been up to during that time.

“Her condition was surprisingly good for a pup that had been homeless for nearly a month. We also have no idea how she came to be in such an isolated part of the bush, with no signs of injury and only basic signs of exposure,” the woman wrote. “We’d speculated that perhaps she was picked up and later dumped, or that she’d found a temporary home but hadn’t stuck around. Whatever the story, we were just happy to have been in the right place at the right time to be able to help her.”

Bobby’s owner never stopped believing she would come home, and had mounted a substantial Facebook and neighborhood poster campaign in hopes of finding her. The pair were very happy to be reunited, as were many others who followed the story. Once Dangerm0use posted her photo journal to Reddit, it went viral, and has since been viewed more than 500,000 times.

“Whatever the story, we were just happy to have been in the right place at the right time to be able to help her,” she wrote.

Losing a pet is never easy to deal with, but there’s no better feeling than seeing those happy tails come wagging home. 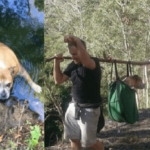