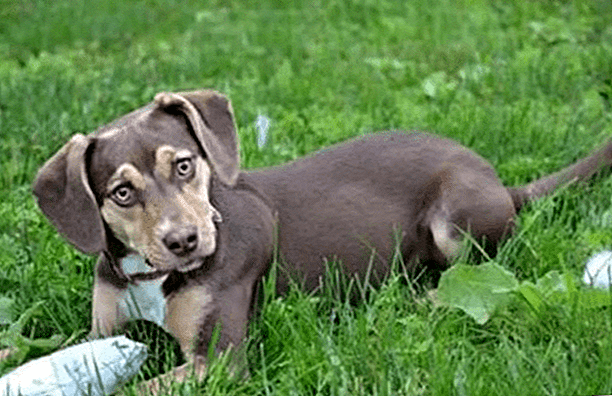 More questions than answers currently surround the story of a 3-year-old girl located in the nick of time by a formerly abused and currently beloved family dog named Peanut.

Little Peanut is rightfully being hailed a hero for leading her owner to the naked child alone in a Rapid River, Michigan ditch on a morning when temperatures dipped near freezing.

According to Upper Michigan’s Source, the girl is safe and not suffering from any serious injuries or hypothermia. Her parents were located, and she and another child have been removed from the home by child protective services. A full-scale investigation is underway, and officers expect to uncover the truth in due time.

Not much more is known about the humans in this strange story, but we have only scratched the surface of Peanut’s heroic tale. In a distant former life her name was Coco. She arrived at Delta Animal Shelter in Escanaba, MI on April 6, 2016. At just 4-months-old she had already suffered unimaginable abuse at the hands of her former human.

The little hound mix had a broken front leg, a broken rear leg, several broken ribs and her belly was full of carpet fibers she had ingested due to separation anxiety or shear hunger. Based on how her bones healed, veterinarians could tell her injuries had occurred at different times. Coco’s abuse had been ongoing and depraved. Her torturer was eventually arrested, prosecuted and sentenced for his crimes.

Shelter staff renamed the pup Petunia, and set about spoiling her rotten as she healed from her physical and psychological injuries. 3 months later she was well enough to be adopted. Although she will always have a limp and be at a higher risk for arthritis, she bravely put her past behind her and was welcomed into a loving family.

They renamed her yet again, dubbing her Peanut. For the past 8 months, Peanut has continued to grow and heal thanks to the love of her new paw-rents. And then came Friday, March 17. It was just before 11 AM when Peanut began “going crazy” and demanding to be let outside.

Peanut’s mom shared the incredible rescue story with her friends at the Delta Animal Shelter:

Dear Shelter,
I must share a heartfelt story about how wonderful our little Peanut has been! She has truly been a blessing to our family and we love having her around. As you know, her background was so heartbreaking and we are so happy that we were able to take her into our home and give her the love and the family she deserves. However, I think she still has some “sixth sense” about her past life that she has carried with her.
Today, Peanut was responsible for saving the life of a 3 year old little girl. About 11am this morning, Peanut started going crazy at our house. She was running up and down the stairs, barking and yelping. She then went and got my husband, who was in the garage working on some projects, and alerted him that she wanted to go outside. He said he could hear her running around upstairs but didn’t understand why. He let her outside where she went barreling into the field behind our house at full speed. My husband followed her and to his surprise, he found a naked, shivering, 3 year old girl curled up in a ball. He scooped her up, wrapped her in his sweatshirt, and brought her inside. He called 911 and reported the incident. By the time the ambulance and police arrived, the little girl could only say one thing – “doggie.”
Thanks to Peanut, a little girls life was saved today. She has been such a blessing to us, and now to others. Words cannot express how grateful we are that we have Peanut in our lives and how amazing she is. She is a part of our family now and thanks to wonderful people like you at the shelter, she is alive. Without her, not only would she have been gone from this world, but the life of this little girl might have been taken as well.

Peanut has gone from abuse victim to resilient survivor to worldwide hero! She has already touched so many lives, and as her story continues to spread, she will inspire countless more. Isn’t it incredible when you realize the true value of every little life? 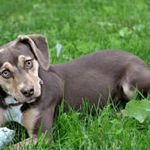