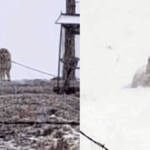 Numerous people who witnessed a dog chained up outside a home in Sedalia, Colorado during a blizzard contacted the Douglas County Sheriff’s Office.

The dog was seen covered in falling snow, while being forced to stand in several feet of it in freezing temperatures.

The Sheriff’s Office immediately got in contact with the owner, who told police that the dog has access to shelter and food but choses to stay outside.

Because the residence is located in a remote area of the mountains and cannot be sadly accessed, deputies are unable to physically check on the dog.

Despite not being able to check on him during the blizzard, the Douglas County Sheriff’s office don’t believe the dog is being abused.

“To be very clear, the Douglas County Sheriff’s Office as a whole are huge dog lovers,” they tweeted. “Ref: the chained dog in Sedalia- it is a dog breed adapted to winter weather and has been checked on several times in the past and has always had access to food, water, and shelter.”

Hundreds of people were angered by the Sheriff’s Office’s response.

“My dog is a great pyr mtn dog & loves snow but he can NOT withstand these kind of temps with no shelter!” one user tweeted. “That dog’s paws are no doubt frozen & he will not have access to water unless his sorry owners take him some every couple mins due to freezing temps!”

“Absolutely heart breaking. I don’t care how much a dog ‘likes snow’ this is unacceptable and there isn’t sufficient shelter,” another wrote. “Absolutely disgusting. Legitimately makes my heart hurt.”