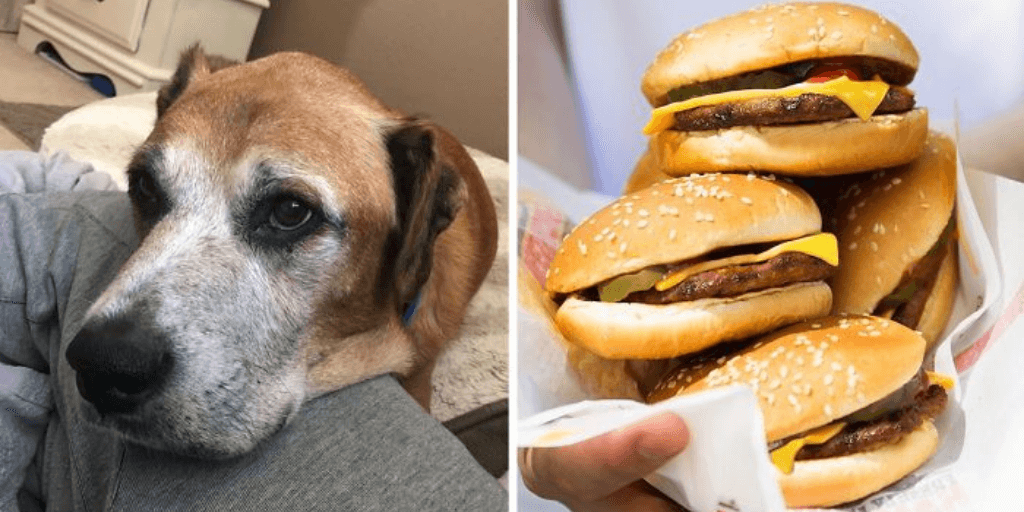 When Alec Karcher’s 10-year-old dog named Cody was diagnosed with cancer two months ago, the veterinarian said he had only 1-3 months to live. It was devastating news for Karcher’s family, but they decided to make Cody’s remaining time with them as positive as possible. As part of that plan, they devised a way to make Cody happy while also making it easier to give the senior dog his medication. They gave him a plain cheeseburger every day, and they plan to keep the burgers coming as long as Cody lives.


Thanks to @BurgerKing for showing so much love and kindness towards my family and our dog, Cody. It’s appreciated more than words can describe. pic.twitter.com/KsKnfXtv0S

On some days, Cody’s family grills up his burger at home. But every now and then, the dog’s daily dose of delicious comes from a nearby fast food restaurant. On July 15, Karcher stopped at a Burger King. He expected to pay for Cody’s burger and leave, but the story of what happened is now going viral on Twitter. According to Karcher’s emotional Tweet, he ordered a plain burger like usual, but then a Burger King employee asked why he wanted the burger plain with no condiments. When Karcher explained the treat was for his terminally ill dog, the employee decided to speak to the store’s manager.

When she came back, she announced the manager wanted to give Cody free burgers for the rest of his life. Karcher said in his Tweet,

“I can’t explain how much that means to us, and my family and I are beyond appreciative. S/o to the employees at the Burger King on Alexis Rd in Toledo, OH for being the best around.”

Twitter users are falling in love with this act of kindness, and they’re reaching out to Cody’s family to show their support. Burger King later responded to Karcher’s thanks by saying,


“The world needs more kindness and empathy. Thank you for giving us the chance to do this for Cody.”

Now that Cody has plenty of delicious treats to help the medicine go down, his family is focusing on making life the best it can be. Free Burger King burgers won’t cure Cody’s cancer, but it will help him savor all the time he has left with the people who love him.