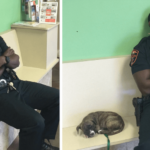 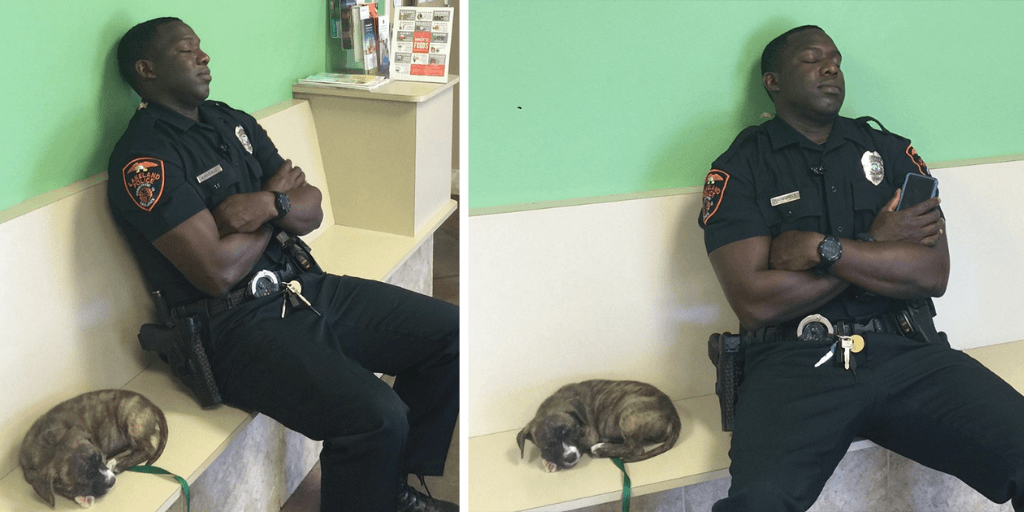 Rescuing a stray puppy may not be a police officer‘s job, but some kind-hearted officers don’t do it for the job. Some genuinely want to help the little ones who can’t help themselves. Officer Kareem Garibaldi of the Lakeland Police Department in Florida is one of those wonderful people.

Officer Garibaldi worked an early morning shift one Saturday in May, 2016. As he drove his patrol car, he nearly ran into a small Pit/Boxer mix puppy. The 8 to 10 week old pup had no identification tags or collar and was just running around loose.

With no number to contact or address to return to, Officer Garibaldi took the search for the puppy’s family into his own hands. He traveled the neighborhood and posted pictures on social media sites the next day, hoping someone would recognize her. No luck.

Unable to locate any family members, he brought the pup to the LPD for food and warmth until the end of his shift. No way would he leave her to fend for herself.

At the end of his third consecutive day working 12 hour shifts, Officer Garibaldi knew he had more still to do for this pup. On his own time off the clock, he brought the dog to the SPCA Florida Medical Center for care and inspection.

Officer Garibaldi sat in the waiting room from 8:45am to 12:00 p.m. while the vet checked the puppy out. The shelter’s safety net manager, Connie Johnson, happened upon the two that morning and took a now viral photograph.

“I could not resist taking this picture when I walked into the clinic at SPCA Florida this morning. Officer Kareen totally went out of his way after working all night to make sure this puppy was safe and sound. Thank you so much for all you do!! You are such an inspiration.”

The poor man clearly needed sleep after a long weekend, but he had different priorities. The Lakeland Police Department shared the touching story on Facebook where it received tons of rightful attention.

“It’s the kind-hearted officers like this that makes the Lakeland Police Department truly unique. Having worked a long weekend, Officer Garibaldi still found the energy at the end of his shift to help man’s best friend.”

Johnson essentially echoed the department’s statement. She pointed out how kindhearted the officer’s commitment to this dog was.

“It clearly was a selfless thing to do. He wasn’t thinking about getting home to sleep. He was thinking about what he could do to help this puppy survive. He actually woke up at one point just to see if she was OK, then he went back to sleep.”

Thankfully, Officer Garibaldi’s efforts proved extremely valuable. The puppy ended up getting adopted later that day by a dispatcher. She now goes by Hope, an appropriate name.

The Lakeland Police Department noted that things like this happen all the time and just aren’t frequently documented.

“That is what happens with the officers in our department. So many of them do such wonderful things to help the community – but they are humble. They don’t do it for personal recognition so it usually goes unnoticed.”

Here’s to those unsung heroes like Officer Garibaldi who go out of their way for furry friends. Hope would surely thank him again if she could!