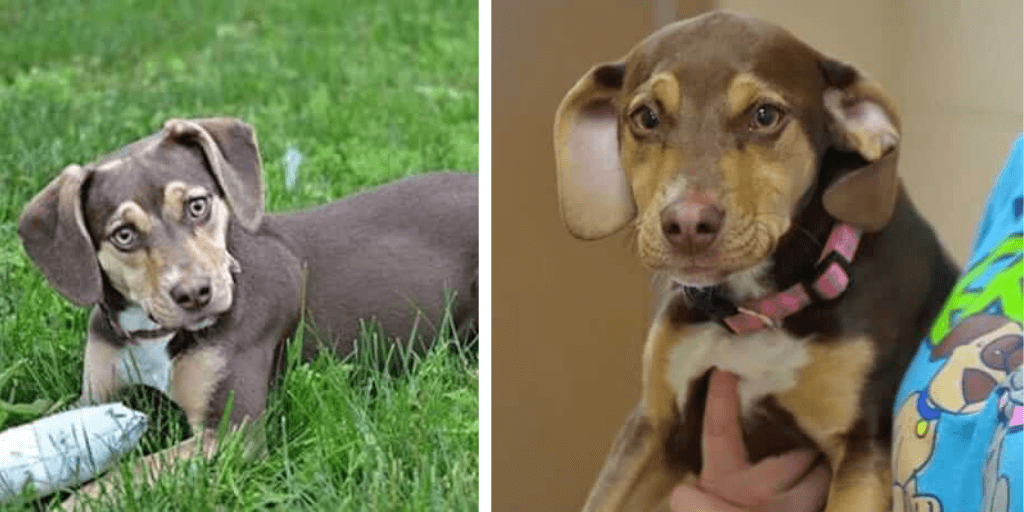 A sweet little dog, named Peanut, was brought into Delta Animal Shelter. She had two broken legs, broken ribs and a belly full of carpet (likely ingested after being starved). The shelter volunteers knew she was special and were elated when she was adopted by a very nice couple.

One morning in 2017, Peanut began acting strangely. She ran around the house, barking incessantly. Her mom had no idea what was going on! Peanut continued barking as if she had something to say. She then ran to her dad and continued to bark until he let her outside. When he finally did, the most incredible thing happened.

Peanut took off running, fast, into the field behind their home. Her mom and dad followed. Peanut led them to a ditch where a three-year-old little girl lay balled up, totally naked.

Peanut took off running, fast, into the field behind their home. Her mom and dad followed. Peanut led them to a ditch where a three-year-old little girl lay balled up, totally naked. They were shocked and immediately called 911. The little girl was freezing, and visibly shivering, so Peanut’s dad wrapped her in his shirt.

“By the time the ambulance and police arrived, the little girl could only say one thing — ‘doggie,’” Peanut’s dad explained in a letter to the Delta Animal Shelter. “Thanks to Peanut, a little girl’s life was saved.”

Michigan’s Delta County Sherrif’s Office confirmed the story in a news statement, crediting Peanut for alerting her owner to the child’s presence. An investigation revealed that the child was living in deplorable conditions and has since been placed in Child Protective Services.

Peanut’s parents sent Delta Animal Shelter the most amazing letter about their super-pup:

I must share a heartfelt story about how wonderful our little Peanut has been! She has truly been a blessing to our family and we love having her around. As you know, her background was so heartbreaking and we are so happy that we were able to take her into our home and give her the love and the family she deserves.

However, I think she still has some “sixth sense” about her past life that she has carried with her. Today, Peanut was responsible for saving the life of a 3-year-old little girl. About 11 a.m. this morning, Peanut started going crazy at our house. She was running up and down the stairs, barking and yelping. She then went and got my husband, who was in the garage working on some projects, and alerted him that she wanted to go outside. He said he could hear her running around upstairs but didn’t understand why. He let her outside where she went barreling into the field behind our house at full speed. My husband followed her and to his surprise, he found a naked, shivering, 3-year-old girl curled up in a ball. He scooped her up, wrapped her in his sweatshirt, and brought her inside. He called 911 and reported the incident. By the time the ambulance and police arrived, the little girl could only say one thing – “doggie.”

Thanks to Peanut, a little girl’s life was saved today. She has been such a blessing to us, and now to others. Words cannot express how grateful we are that we have Peanut in our lives and how amazing she is. She is a part of our family now and thanks to wonderful people like you at the shelter, she is alive. Without her, not only would she have been gone from this world, but the life of this little girl might have been taken as well.”

Peanut, we all LOVE you! Thank you for being a true hero!