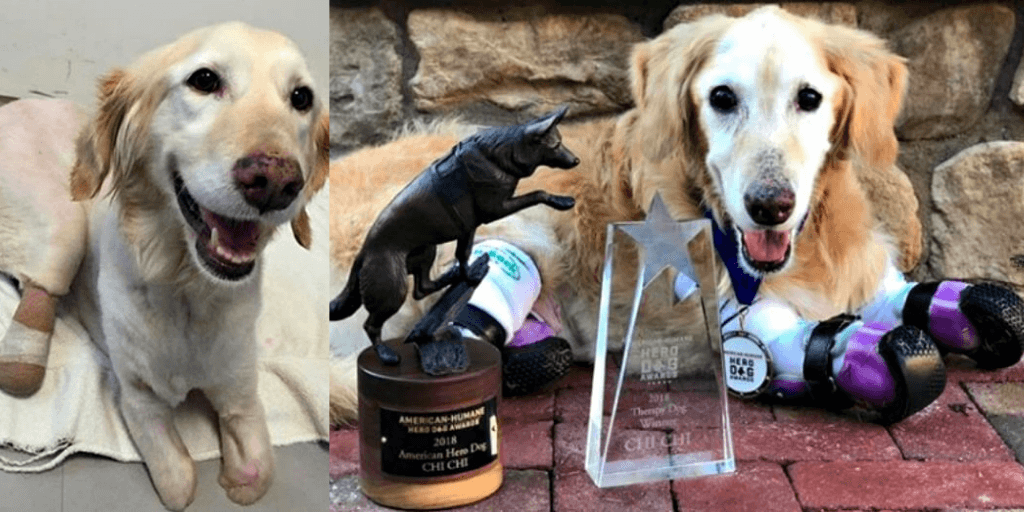 A precious dog lost nearly all of her legs and was even close to losing her life – but Chi Chi’s fate wasn’t going to end here.

The very special golden retriever was going to continue on to overcome her severe injuries, become a therapy dog, and be named American Humane’s 2018 American Hero Dog.

But, first, it’s important to know the background of Chi Chi’s life. As you can imagine, it was a horrific start for the sweet girl. Back in 2016, Chi Chi was left for dead in a dumpster in South Korea. She was found inside a garbage bag with her legs tied together with wire—which were eating away into her skin.

Animal Rescue, Media & Education received news of a potential meat farm, where Chi Chi was found, through Nabiya Irion Hope Project, an animal welfare group based in South Korea. It was pure luck that they happened to find the scared and injured girl at all.

After being treated at the hospital, Chi Chi needed to have all four of her limbs, right above the paw, amputated.

After her surgery, Chi Chi would require lots of rehabilitation. She would also receive four custom-designed prosthetic limbs, so she could learn how to walk again. ARME shared a video of the rescued dog, which is how Elizabeth Howell in Arizona learned about Chi Chi. She knew immediately that she wanted to take the brave dog into her home.

A few weeks later, Chi Chi arrived in Arizona where she would need to be fitted for prostheses. This would prove to be a challenge due to the fact her legs were amputated at different heights.

After a bit of trial and error, Chi Chi had prosthetic legs that had her up and moving quicker than anyone anticipated.

“When people meet Chi Chi, they are inspired by her courage, perseverance, ability to overcome adversity and her never-give-up attitude,” Howell said in a statement released by American Humane. “She exemplifies resilience and forgiveness, and openly shares her love and compassion in abundance. Her sweet-tempered and gentle spirit opens people’s hearts and her perceptive spirit senses where her love is needed.”

Once she was fully recovered, Chi Chi went on to be a therapy dog, often visiting those in assisted-living facilities, veterans, youth, and even other amputees.

“Chi Chi is truly a gift from God,” Howell said after Chi Chi was awarded the Hero Dog honor. “And we are grateful for every day she is here to abundantly share her love and inspire us to never give up.”

Chi Chi made a difference in so many people’s lives, wherever she went. She was a living example of perseverance, love, and compassion. Sadly, in March of 2018, the heroic, beautiful dog was diagnosed with an aggressive tumor in her nasal cavity. She passed away in February of 2019.

Chi Chi’s legacy will forever be remembered and her story is nothing short of inspiring. Learn more about Chi Chi, her incredible rescue, and wonderful life in the video below.