The Skelton family from Texas refers to their dog Daisy as their “first baby.” She was with them before either of their two kids were born, so she holds a special place in their hearts. But she went missing in 2019, and her humans became distraught.

Katrina and Mark Skelton never gave up hope, but their search became less intense over time. They believed that Daisy was out there somewhere, living a good life with someone new. But when she turned up in someone’s Indiana yard 1,200 miles away, her family couldn’t believe their incredible luck!

When Daisy first went missing, Katrina didn’t cut any corners when trying to find her. She regularly posted on Facebook, and she checked weekly to see if Daisy’s microchip had been scanned. But as years went by, the family became less optimistic. Yet, they never stopped believing.

“She was gentle, loving, and patient,” Katrina wrote. “She was with us through 2 pregnancies, 2 toddlers, and 3 different homes. We were heartbroken when we lost her.”

Then, about three years after Daisy disappeared, an Indiana family found a dog wandering around their property. So, they brought the dog to the vet, and her microchip revealed that she belonged to the Texas family. They contacted Katrina right away to share the shocking news.

Within seconds, Katrina and Mike planned a trip to Indiana, which was over 30 hours roundtrip. They found someone to watch their kids, and then they took off on the adventure of a lifetime.

Making Up For Lost Time

Once they made it to Indiana, they couldn’t contain their excitement. At first, Daisy was overwhelmed and hesitant. But once she recognized her humans, she perked up. Katrina said Daisy loves car rides, so the trip back to Texas was no problem for her.

Daisy was even more excited to see the kids and the family’s other dog. She was so ecstatic that she jumped around and whined when she reunited with them. No time apart could make her stop loving her family.

“Daisy was a little overwhelmed and confused at first! She was in an unfamiliar place, and there were a few extra people she didn’t know when she arrived,” Katrina wrote. “Once the chaos settled, and she got comfortable, she started to really recognize who we were! Mark took his hat off, and it was like a light clicked.”

No one knows how Daisy traveled from Texas to Indiana. Katrina suspects that someone picked her up while passing through Texas but never checked her microchip. It seems like she was cared for while she was gone, so hopefully, she had some exciting adventures. If only she could tell us her story! 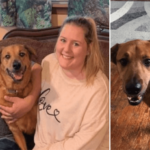