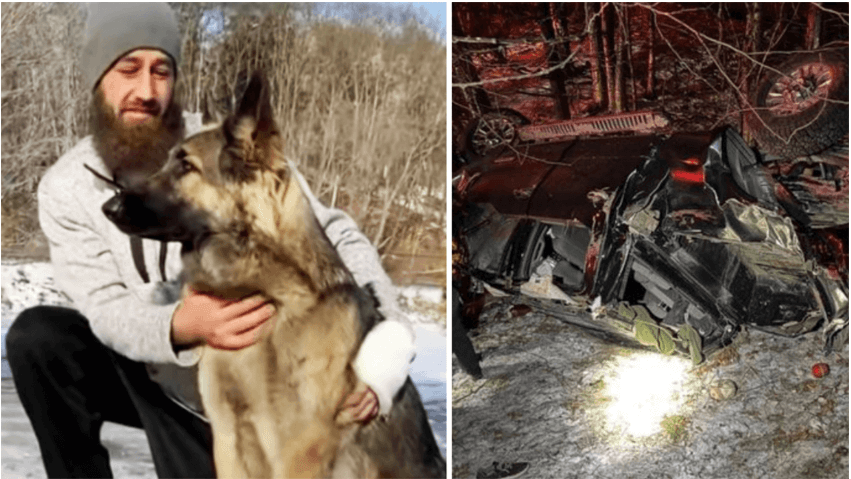 We all remember the old TV series Lassie, about a smart collie who is always able to save the day by alerting people of danger, like running for help when Timmy gets stuck in the well.

While it sounds far-fetched, it turns out the show isn’t too far from real life: we’ve seen many stories of real, quick-thinking dogs who have saved lives by running to get help during emergencies.

That was the case recently, when a heroic German Shepherd led police to the scene of a car crash, helping to save his owner.

According to New Hampshire State Police, on January 3 Trooper Sandberg and officers from the Lebanon Police Department saw a German Shepherd loose on the interstate.

They tried to take in the dog, but it ran off down the highway, crossing into Vermont. The officers followed — and soon realized the dog wasn’t running from them, but was trying to lead them somewhere.

They discovered a damaged guardrail, which led them to a badly damaged, rolled-over pickup truck:

Two occupants of the vehicle were found on the scene, ejected from the vehicle. They were alive but “hypothermic and seriously injured.”

It turned out that the German Shepherd, named Tinsley, was also in the vehicle at the time of the crash — and the smart dog had run for help.

Thankfully, Tinsley was not hurt in the accident. The officers called for medical assistance for the injured men.

One of the men was Cam Laundry, Tinsley’s owner. He was proud of his dog’s quick-thinking, and wasn’t surprised she looked after him in his hour of need.

“She’s my little guardian angel,” Cam told CBS Boston. “It’s a miracle how she has that kind of intelligence to do what she did.”

“She never leaves my side,” he told WMUR. “So we’re always together in that truck that got wrecked she’s always my co-pilot, she’s always with me.”

And Tinsley continued to be there for her owner, even after saving his life: the “guardian angel” watched over him as he recovered from the incident.

“The whole time we were starting our patient care it sat there nice and calm right next to its owner,” said Captain Jack Hedges of Hartford Fire Department.

Thank you, Tinsley, for saving the day! We’re so glad everyone is alive and safe, thanks to this quick-thinking hero dog.

Share this amazing news to show what dogs are capable of. 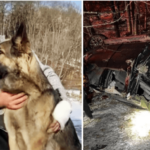