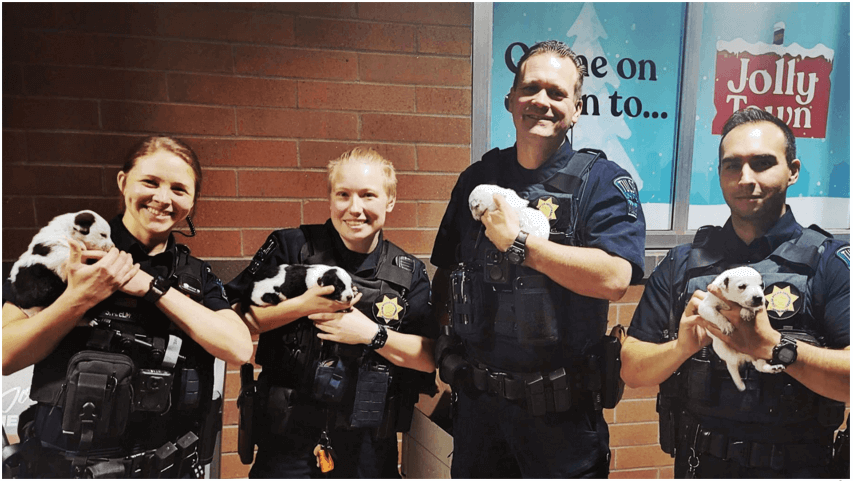 It’s a police officer’s duty to look out for everyone in their community, whether they be human or animal. We’ve seen many stories of officers going above-and-beyond to help pets in distress.

And sometimes, a rescue turns into something more: sometimes pets are adopted by the officers who save them.

That was the case last week, when one group of abandoned puppies found their forever homes in a true Christmas miracle.

According to the Tulsa Police Department, in Oklahoma, five puppies were found abandoned in a zipped-up duffel bag, left on the counter of a QuickTrip gas station.

Officers arrived on the scene — and the sight of the puppies on Christmas day left them “overwhelmed with Christmas feelings.”

The responding officers and the tiny pups made an instant connection, and then something miraculous happened: they decided to adopt the abandoned puppies themselves!

According to a Facebook post from the department, four of the officers — Officer Cordova, Officer Pashley, Officer Perry and Officer Johns — adopted four of the five puppies, while a QuickTrip employee adopted the fifth!

It’s heartbreaking to think anyone would abandon their puppies like this, but everything worked out in the end: these pups found good homes just in time for the holidays, and the officers went home with a very unexpected Christmas present.

Their good deed warmed hearts across the nation, providing a feel-good story for the holidays. The officers and their new pets appeared for an interview on the show Fox & Friends.

People praised the officers for their actions online. “Such a beautiful ending for this story,” one person wrote. “These officers are wonderful human beings! Thank you to all of them!”

In a follow-up post, the department says the puppies are “growing fast and doing great.”

“We’re so glad the pups have found a good home, and we can’t wait to watch them grow up!”

In addition, the department hoped the officers’ story would inspire people to adopt instead of shop — there are many puppies just like these in need of good homes.

“If you’re looking for a pet, please adopt don’t shop,” the department wrote. “There are lots of rescues and shelters that are over capacity for abandoned pets.”

Thank you to these officers for adopting these puppies! What a Christmas miracle.

Spread the good news by sharing this story! 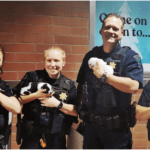