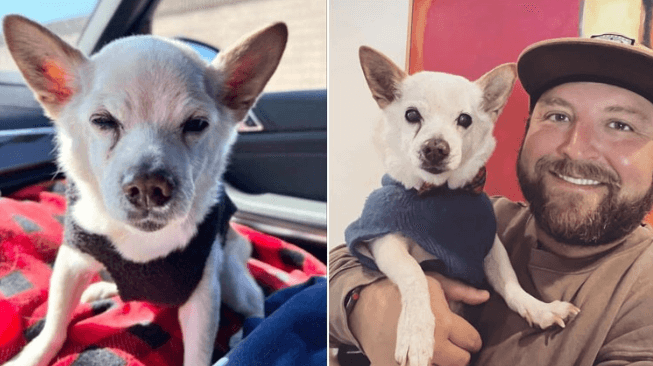 22-year-old Gino Wolf loves salmon treats, napping by the fire, and cruising his California neighborhood in a roomy luxury wagon. The adorable Chihuahua mix was named Guinness World Records’ “Oldest Dog Living” on November 15, 2022, inheriting the title from Pebbles the Toy Fox Terrier, who passed away in October.

“I give him all the credit,” Wolf told TODAY.com.

On September 24, 2000, Bill Clinton was president, a dozen eggs cost 89 cents, and ER was the number one show on television. Also, on this day, a little dog named Gino was born.

Two years later, he was awaiting his forever home at the Humane Society of Boulder Valley in Colorado when Alex and his two college roommates walked in.

Alex, a sophomore at the University of Colorado Boulder, was hoping to adopt a large dog. However, his roommates had their hearts set on 16-pound Gino (known back then as Pee Wee). As it turned out, their instincts were right. Gino turned out to have all the benefits of a big dog in a cute, compact package.

“He always loved being in the big dog park instead of the small dog park. Big dogs would follow him around like he was their fearless leader, and that made Gino proud,” Wolf said. “He always had ‘B.D.E.’ — big dog energy.”

Gino loved living the college lifestyle alongside Alex and his friends. He’d stay up late to party—comfortably perched beneath the coffee table to ensure he was in the middle of all the action—then happily sleep in the next day. He even enjoyed the snow, allowing him to fit right in among the household of snowboarders.

When summer vacation came along, Alex decided to bring Gino home to Southern California to live with his parents, seeing it as “the more responsible thing to do at that point.” Luckily, the pooch happily took to the California lifestyle, sunbathing in the afternoons and bonding with the family’s other dogs.

“When he was younger, he used to love exploring my parents’ huge backyard with our other dogs in Manhattan Beach, going on walks off the leash in Venice, going on drives along the coast blasting music with his head out the window, or running around on the golf course in La Quinta,” Wolf says.

Wolf moved back to California after graduation, and Gino joined him in his new apartment. The little dog was by his side as he became a realtor, bought his first house, and met his girlfriend, Rebecca Grenell.

“I’ve taken great care of him over the years and he is still in relatively very good shape…and really cute still which is surprising considering his age!” Guinness World Records quoted Alex as saying.

Wishing Gino and Alex many more happy, healthy years together! 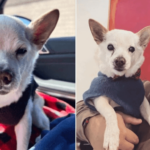